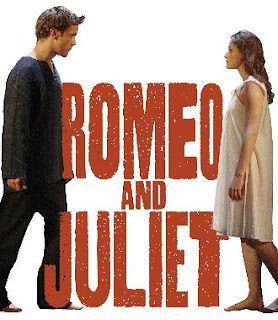 Mariah Gale and Sam Troughton may seem like unconventional casting, but they work perfectly together as Juliet and Romeo. She’s a sulky teenager, rebelling at the marital fait accompli presented to her by her overbearing father (a terrifyingly chilling Richard Katz); he’s a hooded brooding soul, initially almost nerdily obsessed with Rosaline, both alone in their respective tribes but their first meeting awakens something deep inside of both of them and their chemistry together is just electric. He comes to life, dancing jigs of ecstatic joy, and she becomes alive to the possibilities of romantic and indeed sexual fulfilment. We never forget though that their’s is a tragic story, and Gale in particular is painfully strong in displaying the deepening realisation that their situation is not one that is tenable.

The most memorable supporting performance comes from Jonjo O’Neill’s Mercutio, truly outrageous with his pornographic miming and his cold baiting of the Nurse, he brings a huge amount of life to the first half and also does enough to suggest that the brash exterior conceals some deeper, unspoken pain. Noma Dumezweni as the pipe-smoking Nurse and the worldly-wise Friar Laurence of Forbes Masson are also both excellent as the co-conspirators.

There are plenty of Gooldian touches, my favourite probably being the astonishing Moroccan-themed masque and the halo of golden light that surrounds the couple as they finally consummate their marriage. For all the tricks and invention that one associates with him, there’s a remarkable sense of simplicity here, almost all the scenes involving Romeo and Juliet together are played on a bare stage with a minimum of fuss and it is highly effective and all the more moving for it. The only minor faults I found were the subtle video projections used, too subtle to be of any impact to me and the choice to make Christine Entwisle’s Lady Capulet run laps around her daughter’s deathbed: I can see where they were coming from in the depiction of uncontrolled grief, but it just doesn’t come off which is a shame as Entwisle is otherwise superb as the taut, chain-smoking, bewigged mother.

Set in a darkly Catholic, Renaissance Italy, Tom Scutt’s highly effective design focuses on a central platform which serves multiple purposes and a staircase which alternately leads up to the balcony and down to the final tomb. Costumes are a nice mixture of period detail for the ensemble and modern dress for the lovers, which picks up nicely the idea that they are separate from the world around them. This trick is then cleverly and neatly inverted in the powerful final image.

After tiptop circle seats for Antony & Cleopatra earlier in the month, this time I was in the side stalls, four rows back and I was astounded by how well the production was directed in that I might have well have looking straight onto the show, so good was the blocking and the movement around the stage. Any fears you might have about being sat on the side should be dispelled right now as you’re also closer to the action, so that was a nice surprise.

Altogether, I think this was as good an interpretation of this oft-performed classic as I have ever seen. It is fresh and exciting, full of youthful exuberance and a thrilling sense of not really knowing just how far things are going to go, exemplified perfectly in the opening street battle as someone is tied to a stake, mouth stuffed with a petrol-soaked rag and a man with a flaming torch fast approaches. One is so quickly submerged into this anarchic Verona that there’s a real sense of the unknown: as for what happen to the poor soul…well you’ll have to go and see if for yourself!