Following the successful screenings of Measure for Measure and Ubu Roi, Cheek By Jowl have announced that The Winter’s Tale will be streamed live from the Barbican Centre on 19th April at 7.30pm*, for free.

Cheek by Jowl is an international company, with audiences around the world – as such, we will be screening The Winter’s Tale in English, French and Spanish (subtitled), partnering with BBC Arts Digital, Spain’s El País, France’s Télérama and The Sydney Morning Herald in Australia. The screening will also be available with access subtitles.

As well as on these partner sites, the livestream will be available on www.cheekbyjowl.com/livestream, where we will regularly be sharing videos of the cast. This multi-camera screening is made possible due to the support of the Barbican Centre, and funding from The Space, Arts Council England and the BBC.

*The show will be available on demand until 7th May 2017.

Running from 29th June to 16th July, the programme for the 2017 Manchester International Festival has been announced. Highlights include

An interesting diverse selection, best get looking at trains!

Co-Directors of the multi award-winning touring company Up In Arms, Barney Norris and Alice Hamilton return to the Bush following their critically acclaimed production of Visitors, for which Norris won the Critics’ Circle Award for Most Promising Playwright. He has two other productions opening this spring; Echo’s End at Salisbury Playhouse and a revival of Every You Every Me at Oxford Playhouse/ Reading Rep. His debut novel, Five Rivers Met on a Wooded Plain, was released last year and is now a bestseller.

“Sometimes I think my whole life has been a frightening time. Well. I remember the crunch of the gravel under my feet walking back up the drive, and thinking my life might be over. I might have had all of my fun. But I was wrong, it turned out. I’ve had a lot of good things since.”

Eddie and Carol were lovers once, but their lives went in different directions. Now they meet again in a town full of memories, and find something still burns between them. On the country’s southern margin where the towns give way to the English Channel, both search for the centre of their lives.

Shallower people than me (yeah right…) would might be interested to know in the casting new for Defibrillator’s production of the Sam Shepard play A Lie of the Mind at the Southwark Playhouse. Running from 4th May to 28th May, it may not be the happiest of stories as it looks at two families torn apart by spousal abuse… But with Gethin Anthony and Robert Lonsdale in the cast (both stars of a certain list in 2014), it will at least be nice to look at (and most likely problematic!) 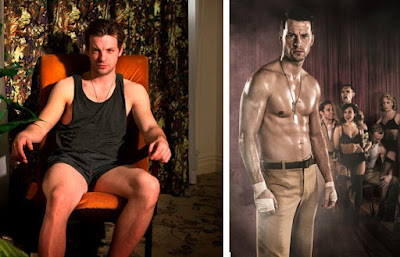