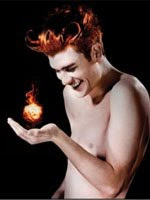 “Second star to the right and straight on till morning”

There’s something about revisiting childhood favourites as an adult, a huge pleasure in discovering the deeper levels and meanings that escaped one’s more youthful self: I remember vividly discovering just how dark and vicious Gene Wilder’s Willy Wonka gets with the truly revolting children in his factory after years of revelling in all the sweets, the excitement of the golden tickets and the Oompah Loompahs. Similarly here, my memories of Peter Pan were limited to the Disney film and the remake Hook, so in a nutshell, lots of fun as a Lost Boy and Julia Roberts being brought back to life. What I was not prepared for was the discovery of a huge well of aching sadness at the heart of this play.

This partly due to the new version created by David Greig for the National Theatre of Scotland, of J.M. Barrie’s classic, which relocates the action to Victorian Edinburgh and in particular the time of the construction of the Forth Rail Bridge, the instant parallels being drawn between the Lost Boys or Neverland and the gangs of young boys used to pass the molten hot rivets to the ironworkers on the bridge. There’s little fun to be had here, but there’s also less fun to be had in Neverland which is reconceived as a darker, more anarchic and dangerous place, populated by boys in need of motherly love, a hunger which drives this whole play and it is one which affected me greatly, as my companion for the evening will attest, tears rolled down my cheeks solidly for the last 30 minutes!

It is tremendously staged: Peter first appears walking down the side of the proscenium from the top, Tinkerbell is a fabulously well realised dancing fireball and the flying, by many members of the cast is well-executed. Crucially though, it is only used as an extra rather than the main attraction, the actors continue to act well whilst airborne which gives it an organic feel, there’s no awkwardness in the transitions. The bridge is represented by three large diamond shaped segments of the ironwork, which revolve and transform neatly into the rugged landscape of Neverland.

Both Kevin Guthrie as Peter Pan and Kirsty Mackay as Wendy are still in training which one would never guess from their performances here. Guthrie captures the two sides of Pan well, the energetic and playful boyishness that still wants to hear the end of the Cinderella story against the enforced emotional coldness and at times wilfully malicious streak. Mackay plays a more strident Wendy, a girl who quickly realises the need to fulfil the void in the lives of the Lost Boys and matures appreciably in front of our eyes. She also has to come to terms with the realisation of her sexual attraction to Peter (perfectly understandable given Guthrie’s nicely toned and always exposed physique!) which lends a more adult edge to some of their scenes.

Cal MacAninch’s muscular, modishly tattooed and kilted Hook is a bare-chested delight, genuinely menacing but the rest of the cast tend to blur a bit, with not much time really being devoted to establishing individual supporting characters, Smee really suffers in this respect but Own Whitelaw’s Slightly caught my eye with a well-nuanced performance that really tugs at the heartstrings, especially when we discover the provenance of his name.

Clues are given to us to suggest that Neverland is actually somewhere in the Kingdom of FIfe and the production is thus suffused with a beautiful Celtic musical heritage. Taking sea shanties and working songs and weaving them with Gaelic folk songs, many of which were sung and played by Alasdair Macrae on the fiddle and Annie Grace on a mightily impressive array of instruments including different types of pipes; a quartet of female voices led by Grace singing John Anderson, My Jo was a personal highlight.

So much of this production was deeply moving to me: mothers singing laments at ever-open windows, the unbridled joy of boys finally having stories told to them, Pan’s emotional detachment, even Hook’s existential angst and of course the devastating coda set in Wendy’s future. My rediscovery of this Peter Pan as a darker and more melancholic story than I ever remembered leads me to think that this is not perhaps the family show people may think it to be, it is more suited for teenagers upwards I would say, but there is much, much to enjoy here. A highly recommended production and it will be newly illuminating to you no matter how recently you’ve seen or read it, just make sure you’ve got a couple of tissues in case it packs the same emotional wallop that it did for me.

Running time: 2 hours 30 minutes (with interval)
Programme cost: £3
Note: there’s smoke and haze (though I’m never quite sure why they warn you about haze…)

Review: What The Women Did, Southwark Playhouse