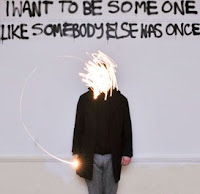 “I’ve been sentenced to reality”

Kaspar is a play by Peter Handke, put on here in a collaboration between Aya Theatre Company and Dreckly Productions with the support of Southwark Playhouse who are running the bookings. With the additional support of Network Rail, they’ve taken over a disused office complex under one of the railway arches close to Southwark tube station to create a pop-up theatre (complete with bar). Handke is an avant-garde Austrian writer, considered a major contemporary European force, but he is rarely performed in the UK: indeed the only experience I have of his work is the National’s The Hour We Knew Nothing Of Each Other, with its 400+ characters, wordlessly crossing the stage.

This work is based on a true story, of Kasper Hauser who was discovered in a town square, languageless but for a single sentence and subsequently taken under the wing of a series of public figures to teach and civilise him. It turned out he’d been kept prisoner in a room all his life and though responding to the attempts to make him ‘normal’, he continually struggled to retain the inner life he had developed. Handke developed this story into a more abstract play, exploring the notions behind it about the coercive power of language to force people into accepted social constructs and limit the expression of the true individual.

The show didn’t get off to the strongest of starts for me: I wasn’t convinced by Kiggell’s physical acting as Kaspar emerged from his prison and the fact that the first utterance of the sentence “I want to be someone like somebody else was once” was relatively normal which somehow undermined the subsequent repetitions, rendering them more playful when they should have felt experimental. But his performance is persuasive and I was soon gripped by the way in which Kiggell portrayed the development of Kaspar.

He is aided in this by Helen Atkinson’s superbly atmospheric sound design which is most effective towards the end of the first act as the disembodied, amplified voices of the Prompters who develop, socialise, even tutor him with a torrent of language, instructions and guidelines delivered live by Elisa Terren and Duncan Thomas from shadowy corners and off tape by Anastasia Hille. These layers of sound, combined with Kaspar’s ever-expanding linguistic skills make for a eerie soundscape, hauntingly beautiful.

Then post-interval, there is an astonishing scene with a highly revelatory monologue from Kiggell who articulates Handke’s arguments beautifully as Kaspar reaches his apotheosis in linguistic mastery but with a corresponding loss of any trace of individuality that is almost devastating in its inevitability. Given how strong this section was, I found the final twist of a group of doppelgängers who arrive to reclaim Kaspar and their physical theatre stylings, care of Dreckly Productions, to be a little frustrating. It wasn’t immediately clear that they were indeed doppelgängers, being a range of sizes all different to Kiggell and given how little physical work was in the rest of the show, the tonal shift into this final scene jarred for me, resulting in an uncertain ending.

So, a challenging production of what is a fairly challenging play. If I’m being honest, I don’t think this is really for the casual theatregoer, Handke’s work is too dense and experimental to be viewed without some previous knowledge and appreciation of what he is trying to achieve. But armed with a little awareness and a little tolerance for what is a clearly ambitious theatre company, Kaspar offers an intriguing opportunity to explore something quite original.