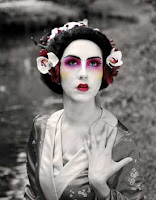 The Southwark Playhouse’s Japanese-inspired production of A Midsummer Night’s Dream provided a welcome respite from a chilly Monday night. Performed by a pared-down cast of 7, with everyone doubling up (and in one case tripling up), this made for an intimate retelling of the story. Most interestingly the lovers also played the Rude Mechanicals, a choice I had not seen before, but one which for the most part worked.

With a minimalist set, and dressed in traditional Japanese attire, the transplanting of the action to Japan looks very effective, and it feels like an interesting twist on what is such familiar material: for example, the fairy Mustard-seed becomes Wasabi. Jay Oliver Yip’s Puck had a wonderful physicality and his delivery of the impish lines did not disappoint, and I felt all four of the lovers/Mechanicals delivered strong performances. However, the Theseus/Oberon and Hippolyta/Titania roles suffered a little bit from heavy Japanese accents to the occasional point of unintelligibility. It was only with the opening scene of Act 2 with Oberon and Puck where it seemed that the accent was being exaggerated and played for comic effect that one felt comfortable enough to laugh at the delivery without seeming patronising.

So despite the faint smell of cabbage in the auditorium, I would recommend this show as extremely good value and a fun night out, and I love the fact that drinks can be taken into the show without having to be decanted into flimsy plastic containers. A Midsummer Night’s Dream runs until February 28th.