Eesh. The world already has too many Churchill films, never mind the fact that two big ones were released in the same year (Brian Cox’s Churchill was the lower profile one here). And for me, there’s nothing here in Joe Wright’s direction or Anthony McCarten’s writing that merits the retread over much-covered ground.

That is not the prevailing opinion obviously, as the film’s seven Oscar nominations testify, but it is what it is. No amount of latex makes Gary Oldman’s performance palatable (and isn’t it odd that he’s getting such acclaim for a role in which he is unrecognisable), and it is a crime in the ways in which the likes of Patsy Ferran and Faye Marsay are under-utilised, nay wasted. END_OF_DOCUMENT_TOKEN_TO_BE_REPLACED

They say write of which you know and as a former showbiz editor of the Daily Express, amongst other journalistic credits, it should come as little surprise that Mark Jagasia’s debut play is set in the world of print journalism. More specifically, Clarion takes place in the offices of the kind of tabloid that revels in 300 consecutive days of ‘shock’ headlines about immigration and has few scruples about the tactics it employs in an age of declining sales.

Jagasia clearly has a fondness for his time on Fleet Street and that shines through the satirical comedy here – the almost childlike rantings of a giddily autocratic editor, the salt-of-the-earth plainness of the news editor, the booze-and-expense chugging foreign correspondent, the batty astrologist, the overenthusiastic work experience kind, the journalist with pretensions of becoming a novelist. The larger scenes of criss-crossing banter have a well-wrought energy and sharpness of wit that is frequently laugh-out-loud funny. END_OF_DOCUMENT_TOKEN_TO_BE_REPLACED 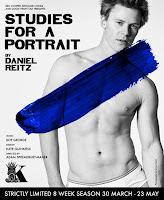 Julian Barker is one of the greatest modern American painters, on a par with Warhol and Bacon, but when he is diagnosed with advanced pancreatic cancer, he retreats to his summerhouse in the Hamptons to make preparations for his death, but also with the help of his much younger boyfriend Chad in creating a foundation, for his enduring legacy. There are not the only ones though, as an ex-boyfriend of Julian is hungry for both artistic and financial recompense and things are further complicated by Chad’s other boyfriend Justin, an even younger underwear model, is also staying with them. END_OF_DOCUMENT_TOKEN_TO_BE_REPLACED

I have long struggled with Chekhov, I’ve never really seen the attraction or seen a production that made me understand why he is so well regarded as a dramatist. So when the Donmar Warehouse announced a hugely star-studded season of plays to be performed in the West End, at the Wyndhams Theatre, my heart sank a little bit to see that the first play was Ivanov, by none other than Anton Chekhov. But in a new version by Tom Stoppard, directed by Michael Grandage and featuring the return to the London stage of Kenneth Branagh, this emerged as a production that might actually have convinced me that people are onto something here!

The key to my enjoyment here was all about the humour that is threaded throughout the evening so that the dour tragedy that is something of a trademark is leavened with something else and introduces a wider palette of emotion so that the ‘tragedy’ becomes well, more tragic for being contrasted with something else on offer. So Ivanov, seeking escape from his TB-ridden wife whom he no longer loves, rocks up at the neighbours’ house on a regular basis despite owing them money and a daughter there who has designs on him. When discovered together, society turns it disapproving eye on him but it turns out there’s a far harsher critic in Ivanov himself. END_OF_DOCUMENT_TOKEN_TO_BE_REPLACED