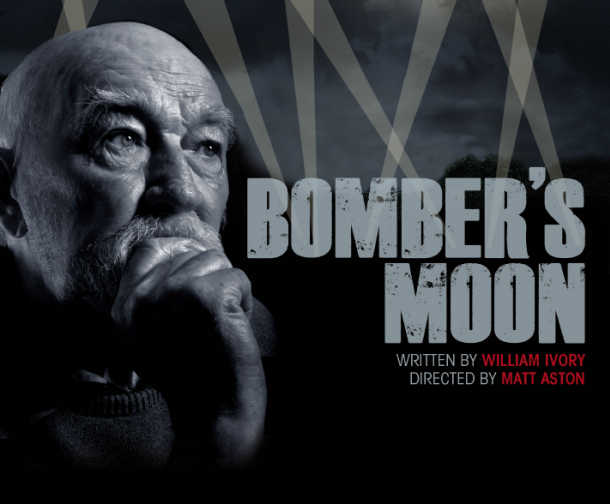 “That’s the one thing about getting to this f*cking age, you can get away with anything”

It’s a rare occasion that I can get to the theatre without knowing anything much about the play I’m seeing but somehow, I managed it with Bomber’s Moon which has just opened at the Park Theatre. I knew it had James Bolam and Steve John Shepherd (who will always be Jo from This Life for me, especially as I don’t watch Eastenders) and it involved the Second World War somehow, and that was enough for me. And I’m glad I resisted the temptation to find out more as the element of revelation added hugely to my enjoyment of a beautifully written piece of theatre.

The opening quarter of an hour or so is just hilarious. Cantankerous former RAF gunner Jimmy is raging against the dimming of the light (“If I were a shop, I’d have ‘last few days’ written all over me”) and his new care assistant David is having a grim first day at work (“I tried to spoon porridge in her mouth but she was dead”). Slowly but surely though, a touching relationship develops between the two men which helps to deal with their respective but substantial demons. It is simply done but hugely effective, I was gripped from the off and wiping tears away by the end.

Though comically strong, writer William Ivory also deals beautifully with memory and mortality, and the masculine propensity for emotional repression. Bolam’s Jimmy a perfect exemplar of the cruelty of an ailing mind on the liveliest of spirits and there’s a delicious pleasure in seeing the veteran actor giving so filthy-mouthed and fearlessly funny a turn. This just deepens the pathos as we come to see how ill he really is, and flashbacks of his war experience come to dominate his existence as with David’s help, he finally digs deeper into what was such a defining moment in his life.

But this process also helps the younger man. Having suffered the breakdown of his marriage and mental health, caring for Jimmy represents the new start David so badly needs though he is unprepared for the rigour with which his new-found faith is tested by the older man. Shepherd is best in these interactions, the ever-shifting balance between the two always fascinating as just who is helping who is constantly in flux, though David as a character feels a little under-written in the face of the layered complexity of Jimmy, his tragic demeanour perhaps not quite as well earned.

Matt Aston directs both men with a pleasingly light touch as they sine in their naturalism; Laura McEwen’s design combines the claustrophobic limits of sheltered accommodation with hints of the planes Jimmy used to fly; and James Farncombe’s lighting and Damian Coldwell’s sound are used evocatively to delineate the moments when he retreats into his memories. It all adds up into something really quite special, strong throughout but utterly heartbreakingly moving in its final moments. Highly recommended.

Running time: 1 hour 50 minutes (with interval)
Booking until 11th May