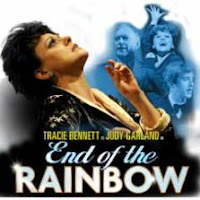 This isn’t so much an impersonation of Judy Garland as an embodiment of her by Tracie Bennett, in what is a truly awe-inspiring performance. And it is testament to the depth of her skill that one isn’t longing for the next song to kick in as the acting scenes are just as strong and engaging as she battles with her constant need for reassurance, her fears of not being loved and ending up alone and the struggle to keep off the pills. This is clearly no hagiography as even though we get to see much of her waspish humour with some cracking one-liners, Garland is also shown at the depth of her desperation, begging to be given some of her ‘grown-up candy’, stumbling and cracking onstage during performances.

Around her are those who would help her in their own way and though these are minor parts in comparison, they are valuable to the whole experience. Stephen Hagan takes on the role of Mickey Deans, her fifth husband who took on the role of manager too and tried to help her go cold turkey, with a marvellous hairpiece and array of polo-necks and a most handsome stage presence, as he tries to buck the trend with endless patience to keep Judy clean and sober but ultimately succumbing to the pressure. But it is Hilton McRae’s wryly affectionate gay pianist Anthony who captures a moment of gorgeous emotion as he applies make-up to his heroine’s face and then offers her a glimpse of an alternative life of domesticity in Brighton: the anguish on her face as she dismisses him for Mickey is just heartbreaking.

Gareth Valentine leads the superb band who are intermittently revealed by William Dudley’s neatly designed set for the performance numbers of the standards such as ‘Just in Time’, ‘You Made Me Love You’ and ‘The Trolley Song’ and such was my enjoyment of the show that I totally forgave the rendition of ‘The Man That Got Away’ which was worked into the narrative, the only instance of this, rather than as a performance number. This was something which annoyed me hugely in Jersey Boys as the switch between the two modes happened so many times, but Bennett’s version of this Gershwin number, starting from a prone position is simply outstanding.

It is matched only by a truly hairs-on-end moment after her off-stage death and she sings ‘Somewhere Over The Rainbow’ to rapturous applause. I don’t think I’ve ever witnessed such an instantaneous and practically unanimous standing ovation as at the end of the show here, much unlike the manufactured reception that one experiences at the end of FELA! This was a massive outpouring of appreciation for a truly tremendous performance and the humility writ large on Bennett’s face was a wonderful sight, one which I hope will be richly rewarded come award season.