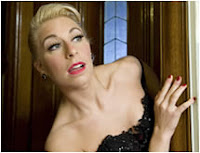 One of the most annoying things about the transport network in this country is the fact that so much of the repair work and resulting closures take place at the weekend so that normal folk are vastly inconvenienced whilst the suits have their week-day travel protected. Whether it is national train services being replaced with coaches or TfL’s ever-ongoing programme of line closures and restricted services on both the underground and overground trains, it makes it extremely hard to make a reliable travel schedule. Which is a long-winded way for me getting round to saying that despite my best efforts, I only made it to the second half of Me & Juliet at the Finborough.

Consequently this is going to be more a collection of comments rather than a full-blown review, you should head over to Webcowgirl’s site to read the view of someone who arrived on time. This is actually the European premiere of Rodgers and Hammerstein’s show, continuing the Finborough’s exploration of the lesser known works from their canon, State Fair received its UK debut here last year subsequently transferring to the Trafalgar Studios 2 this summer.

The plot is described thusly on their website: “when singer Jeanie and stage manager Larry are secretly married, they arouse the suspicion and jealousy of lighting technician and ex-boyfriend Bob. It’s chaos on stage, and unbridled passion back stage, but the show must go on…” The mix of backstage scenes and performances was good fun, but my favourite number was ‘Intermission Talk’ which was genuinely really funny with its chattering theatregoers with their contrasting views on the theatre. Clearly I was disappointed to have missed the first half, but it did feel quite imbalanced with little actually happening in the second part and quite an abrupt ending.

Alex Marker’s design was cleverly done, using the natural features of the theatre to evoke the backstage area and quick-dropping curtains allowing for speedy shifts into the performance space of the show within this show. Actually, much of the same creative team from State Fair including director Thom Southerland are in place here, and the cast also contains a few familiar faces from that show too. Jodie Jacobs impressed again with her great stage confidence, Anthony Wise is hysterical whether he’s wearing a cape or not and Laura Main played another willowy sweet-voiced heroine well: I was sorry to have missed the majority of Stephen McGlynn’s numbers but I did have a nice chat with him.

The most entertaining part of the show was one of those random moments that you could never predict. During a big cha-cha dance number, one of the male performers managed to lose control of one of his maracas and it came flying into the audience: quite how he managed not to lose his composure I do not know as we in the audience were in hysterics! I have to admit to finding the music that I did hear to be somewhat unremarkable: not bad per se but just not particularly memorable, although seeing the first act might have helped!

Review: Come From Away, Phoenix Theatre

Review: The Distance You Have Come, Cockpit