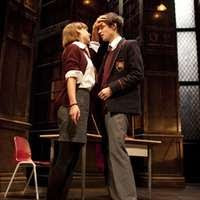 sing up embarassingly as schoolboys) with a combination of some experienced actors and some debutantes. This definitely adds to the freshness of the production, which is handsomely mounted, the library set looking very convincing. The action opens with new girl Lily meeting the somewhat kooky Will who is keen to impress the newcomer but finds his plans skewered by the arrival of other schoolmates into the library.
As a wryly observed comedy, the opening few scenes do really well at setting the scene of fractious teenage relations and are well-written, with some genuine laugh out loud moments. Appearing to not take itself too seriously, the almost Dawson’s Creek-like speechifying is amusing, especially since it is mostly delivered to the audience with little interaction from the fellow cast members. But with the shift into drama midway through, the weaknesses of the play are sadly highlighted, as it becomes apparent that it is meant to be a realistic portrayal of teenage angst. One find it very hard to buy the sudden brutality of the villain, especially

given the foppishness of his nature earlier on, and the passiveness of the other characters in this key scene was also hard to believe. For me, the main problem was the sheer disparity of the group of characters: without a real device to bring them together (c.f. detention in The Breakfast Club) it somewhat stretched the imagination to have this group meet time and time again, especially given the vileness of much of their behaviour towards each other.

And whilst I am a fan of good plays running without intervals, the final coda felt like a very misguided addition, managing to both dissipate all the tension that had been built up in the preceding scene and add precisely nothing to the message of the play. A shame

really as finishing 10 minutes earlier could have left a much greater impression.

Acting wise, Tom Sturridge impressed as Will, reeling off some incredibly verbose passages with ease and benefitting from the one really well-drawn character in the play. Jessica Raine as the object of his affection Lily started off brightly with a superb performance, but soon finds her character sidelined and somewhat reduced to stereotype which was a shame. The rest of the cast did well, but due to their almost caricature-like statuses, struggled to make any real impact, since we are asked to stretch the imagination too much to really invest in any of them.

One final note about the audience: the Lyric is very good at attracting a much younger crowd to its shows, but tonight’s lot were quite appallingly behaved. Laughing raucously at every swear word I could live with (just), but when this extended to random outbursts at just casual remarks, it really became intrusive. Had I greater strength of character, I would have said something to the main offenders as they were seated but two places to my left, but I wimped out. Maybe there is something to be said about the middle-aged middle-England mediocrity of the National’s regular audience after all!

TV Review: An Adventure in Space and Time

Shows I am looking forward to in 2011