It’s a season that start off tremendously, the serial killer vibes of ‘A Guilty Mind’ and the decades-spanning effects of ‘Lost’ offering up a different take on forensics for once. But towards the end of the run, it is clear that a decision has been made (who knows by whom) to give Harry more to do and that throws things off balance. END_OF_DOCUMENT_TOKEN_TO_BE_REPLACED

“This is not Toy Town. I am not Mr Plod. You are not Tessie Bear”

The establishment of a team around Sam Ryan at the Lyell Centre was certainly one of the best decisions Silent Witness made, certainly while Amanda Burton’s frosty lead was still at the helm. And I think Series 7 ranks as one of her best as the writers finally tackle her self-declared infallibility and throw her inability to work nicely with others right under the microscope.

Through stories of suspected terrorism, steroid abuse and sexual assault, there’s an ongoing theme of reputational integrity, examining how far people will go to protect their name. Professionally, she has her own judgement called into question, both by outsiders and in a clever twist by William Gaminara’s Harry as the colleagues are pitted against each other in a high-profile case. END_OF_DOCUMENT_TOKEN_TO_BE_REPLACED

Just wanted to spotlight this photo feature in the Guardian, looking at various Royal Shakespeare Company queens from across the ages. Costume, hair and design really do bring it when it comes to Cleopatra eh?!

And I’m glad I did as it is a proper work of art in its own right. Annand has been photographing actors for over 25 years and as such, has a veritable treasure trove of shots to share with us, resulting from the trusting relationships he has built up with so many, from the new kids on the block to veritable dames. END_OF_DOCUMENT_TOKEN_TO_BE_REPLACED

“We’re all shattered underneath really, aren’t we”

The second part of Nicola Walker’s cross-channel takeover of crime drama has been BBC1’s River. An altogether different prospect to ITV’s Unforgotten, Abi Morgan’s six-parter is aesthetically closer to the Nordic noir of which TV audiences seem unendingly enamoured but still manages to find its unique niche in a crowded marketplace. The Scandi feel is enhanced by the genuine casting coup of Stellan Skarsgård as DI John River but what marks out River are the people around him.

Chief among these is Walker’s Stevie, DS Stevenson, who we meet straightaway and instantly get a feel for their closeness of their professional relationship as they tackle crime on the streets of London. But what is brilliantly done is the shift from buddy cop show to something altogether darker as [major spoiler alert] we find out at the end of episode 1 that Stevie is dead, murdered recently, and River is in fact imagining her presence at his side, even to the extent of regularly conversing with her. END_OF_DOCUMENT_TOKEN_TO_BE_REPLACED

“It can be hard to find an ex-teacher”

Opening with a chance encounter with a former teacher by St Paul’s Cathedral, Stephen Poliakoff’s My City is his first work for the stage in over a decade. But its opening promise of delving into the mysterious hidden depths of a city we think we know so well with the added spice of revisiting mythic childhood teachers outside of the familiar context of the classroom now they are retired is never really fully realised. Poliakoff directs his own work at the Almeida and has secured the return of Tracey Ullman to the stage to play Miss Lambert, the former Headmistress who is found sleeping on a park bench.

Former pupil Richard is the one who finds her and we find out that she has taken to exploring the streets of London at night-time now she is retired and her gift for story-telling that so captivated her pupils remains strong as ever. This in turn prompts a series of renewed contacts which brings in his old school-friend Julie and two more of their teachers. Richard can tell that someone is not quite right with his childhood heroine though and as he seeks to get to the truth of Miss Lambert’s behaviour, he uncovers a world of secrets, lies, disillusionments and memories from all five of them. END_OF_DOCUMENT_TOKEN_TO_BE_REPLACED

“If someone chooses to disappear, then they need to stay gone”
The European premiere of JT Rogers’ Madagascar arrives at the Theatre 503 in Battersea for a run until 5th June presented here by a co-ordinated effort between Primavera and Le Nez Productions. After Anyone Can Whistle and The Rivals already this year, Primavera are turning into a bit of a must-see producing house for me and when I heard my favourite of the Cusack sisters had been cast in this play, I knew that I would be trekking south of the river for this.
Madagascar takes place in a hotel room opposite the Spanish Steps in Rome and is narrated by three different characters, all affected by the disappearance of a young man. His mother Lilian appears five years ago at the point of the incident, his sister June relates the tale from a few days ago and Nathan, Lilian’s adulterous lover, is there in the present. Although they occupy the same space, they are each there alone, as they tell their stories and the monologues weave around each other, dealing with the pain of loving others, whether that’s filial, parental or conjugal love and how these relationships can horribly wrong.
What makes the evening really sing though is the sheer quality of the acting. I’ve long been a fan of Sorcha Cusack and she did not disappoint as the domineering mother with her classy facade that doesn’t quite cover the complexity and indeed darkness of the persona beneath, hints of which break through at key moments in flashes across Cusack’s face. But I was equally impressed with Miranda Foster’s fragile June, tormented by grief but also perhaps grateful for the sense of purpose given to her through tragedy and Barry Stanton’s gruff but amiable economist.
Colllectively they wove together their stories and really made us care for these characters, making Madagascar as much a study in the impact of grief on those left behind as a mystery about the disappearance of a man and this makes the play considerably stronger than it might have been in a weaker production. Whereas the writing is intricate in relating the three time zones and poetic in the imagery it creates that resonates throughout, it’s a little too clever at times and keeps the audience at a bit of a distance: very rarely do we have the opportunity to lose ourselves in the true emotion of a scene and it is a real credit to the three actors that we do invest in these people.
Creatively it is extremely strong: Tom Littler clearly recognises the weight of the talent here and so has carefully employed a minimum of distractions around the actors. The faded glamour of the hotel room is evoked through the lovely burnished silver walls, a bed, bedside table and a desk the only furniture in Morgan Large’s subtle design, Will Reynolds’ lighting is excellent in smoothly and efficiently transitioning between the time periods and Jamie Beamish’s haunting cello-based score perfectly sets the contemplative mood.
Altogether I found Madagascar a very satisfying night at the theatre. Whilst I may have found Rogers’ writing a little too clever, there is no denying that he is possessed of some extraordinary skill: the way in which he obliquely reveals information is delightful, the way in which the characters are related for example and the way in which the competing theories for the disappearance are built up and floated as possibilities. Combined with some of the best acting currently on the London stage and a fabulous design aesthetic, Theatre 503 have themselves a winner, book a ticket now!
Running time: 1 hour 55 minutes (with interval)
Programme cost: 50p

The Five Wives of Maurice Pinder is a new play by Matt Charman, playing at the National Theatre and looking at whether polygamy is a valid or possible lifestyle choice in the middle of suburbia. Set in a regular house in Lewisham, Pinder and his wife Esther have not been able to have children, so he divorced her and married Fay who delivered a son, Vincent. However Esther didn’t move out and realising he was onto something here, Pinder repeats the trick twice more, filling his house with wives and children. But this alternative lifestyle has its downsides and two new arrivals threaten to upset the delicate balancing act.

Whilst an unbelievable concept, especially given Lamb’s average Joe looks and demeanour, Charman does well at spinning the web that holds them altogether. Sorcha Cusack’s childless earth mother who rather enjoys having a flock to tend over; Clare Holman’s Fay who masks her unease by drinking and sleeping around whilst fretting over her gangly awkward son (Adam Gillen, who is bizarrely brilliant); Martina Laird’s Lydia who was essentially just after a sperm donor. Enter Carla Henry’s Rowena, a heavily pregnant and emotionally and physically battered teenager who is welcomed into the strange state of affairs. This all kind of works and is surprisingly well executed. END_OF_DOCUMENT_TOKEN_TO_BE_REPLACED 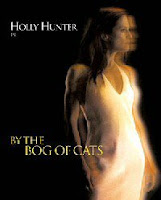 More seasoned theatregoers will tell you you should never book a play on the strength of its star alone, but when that star is Academy Award winning actress Holly Hunter, star of one of my favourite films The Piano, then I had no hesitation in booking my ticket no matter what the play was. The play in question in By the Bog of Cats, a retelling of Euripides’ Medea by Marina Carr which blends aspects of ancient Greek myth with more modern Irish folklore creating a world of gypsies, witches and ghosts in which this story pays out.

In this adaptation, the Medea figure is represented by Irish tinker Hester Swain, a woman living on a rural Irish bog and facing the fact that everything in her life is slipping away: her man, her child, her home, her heritage. Her younger lover has left her in order to wed a woman who can bring him increased wealth and prestige, and he constantly threatens to part Hester from their child in order to raise the girl in his new, more privileged world. The play opens at dawn on the fateful wedding day, and we watch the lengths Hester goes to as she fights like a hellcat not to lose what belongs to her as horrific secrets from the past reveal themselves. END_OF_DOCUMENT_TOKEN_TO_BE_REPLACED