“Now is the time when the people of Chile come together”

I’m going to put it out there, I have no idea why new musical The Postman and the Poet hasn’t received a major production yet. This concept album was recorded in 2011 and has to rank as one of my favourite things I’ve listened to over the last few weeks of all these cast recordings, if not the whole year. It’s even based on source material that has Oscar-winning connections to endear it to risk-averse audiences – if From Here To Eternity can make it to a West End theatre, I’m sure The Postman and the Poet could make a decent stab at it too.

The show is based on Antonio Skármeta’s novel Ardiente Paciencia, on which the 1994 Oscar-winning film Il Postino was based, but Trevor Bentham and Eden Phillips’ book keeps the story of the musical in Isla Negra, a small fishing village on the Chilean coast and in the early 1970s, when political turmoil threatened to overwhelm this South American country. And Michael Jeffrey, a composer new to me, has pulled together a hugely exciting and accomplished score that blends its Latin influences seamlessly into a grand musical theatre style. END_OF_DOCUMENT_TOKEN_TO_BE_REPLACED

“We had such hopes…”

To celebrate its 25th anniversary, The Phantom of the Opera decamped to the Royal Albert Hall for 3 performances, the highlights of which were spliced together to give a full CD/DVD release package which contains as full a rendering of the entire score as it currently available. Maybe it was a rush job though as the sound quality on this CD really isn’t good enough for it to be genuinely recommendable, even for a live recording.

I also had mixed feelings about the production itself. I just can’t get on with Sierra Boggess’ voice, her soprano voice always erring to the too shrill for my liking and the vibrato she employs has all the subtlety of a jackhammer. Christine isn’t the strongest-written of roles at the best of times and Boggess just feels too emotionally vapid to be the inspiration of such all-conquering adoration as she is served with in this story. END_OF_DOCUMENT_TOKEN_TO_BE_REPLACED

“Life has dropped you at the bottom of the heap”

For many people, myself included, it is nigh on impossible to approach a film version of stage behemoth Les Misérables with a blank slate. It’s been a mainstay of the musical theatre world since its 1985 London debut – it is most likely the show I have seen the most times throughout my lifetime – and after celebrating its 25th anniversary with an extraordinarily good touring production, has been riding high with a revitalised energy. So Tom Hooper’s film has a lot to contend with in terms of preconceptions, expectations and long-ingrained ideas of how it should be done. And he has attacked it with gusto, aiming to reinvent notions of cinematic musicals by having his actors sing live to camera and bringing his inimitable close-up directorial style to bear thus creating a film which is epic in scale but largely intimate in focus.

In short, I liked it but I didn’t love it. I’m not so sure that Hooper’s take on the piece as a whole is entirely suited to the material, or rather my idea of how best it works. Claude-Michel Schönberg’s score has a sweeping grandeur which is already quasi-cinematic in its scope but Hooper never really embraces it fully as he works in his customary solo shots and close-ups into the numbers so well known as ensemble masterpieces.  ‘At The End Of The Day’ and ‘One Day More’ both suffer this fate of being presented as individually sung segments stitched together but for me, the pieces never really added up to more than the sum of their parts to gain the substantial power that they possess on the stage. END_OF_DOCUMENT_TOKEN_TO_BE_REPLACED

I don’t normally read much about shows before I go in especially if they are new to me, as I do like that element of surprise and novelty that is increasingly rare. But had I read that Floyd Collins, just opened at the Southwark Playhouse, was a musical containing a song that Stephen Sondheim wished he had wrote and is routinely described as complex, demanding and jagged, I might have been a little better prepared for it. Tina Landau (book and additional lyrics) and Adam Guettel’s (music and lyrics) musical really is a daring piece of work which challenges and provokes, though in this case ultimately frustrates.

Using the depths of the converted Vault space and a lot of ladders, James Perkins’ design seems ideally suited to recreating 1925 Kentucky and its system of inter-connected caves which our eponymous leading man is famed for exploring. But as he searches for more fame and fortune in new caves, he gets trapped by a rockfall 55 feet under the ground but it is the efforts to try and release him end up and the huge media circus that forms around it that makes up much of the show, exposing the effects on Floyd, his family and those trying to rescue him. END_OF_DOCUMENT_TOKEN_TO_BE_REPLACED

The soundtrack, edited highlights rather than the full score, captures much of what made that production so vibrant so that it doesn’t really matter that we don’t have any of the striking visuals and choreography that accompanied this Latin American infused remounting. The orchestrations have been totally refreshed in line with this re-envisioning and with Roger’s singing leading the company, there’s just a greater sense of authenticity about the whole shebang. END_OF_DOCUMENT_TOKEN_TO_BE_REPLACED 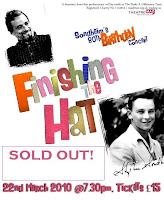 Finishing the Hat, at the King’s Head, featured a diverse array of West End performers coming together to pay tribute to Sondheim with a birthday concert, cherrypicking their favourite songs from his shows and performing them simply on a stage under Chris Peake’s musical direction, accompanied by keyboard, bass and percussion. The show was held together by compere Chris Allen, who provided some linking material whilst one performer shuffled off and the next emerged from the curtain behind, and a powerpoint presentation showed us pictures of the man himself throughout his career and even a hilarious snippet of the Simpsons. Yes, it was all a bit low-rent but this show proudly wore its heart on its sleeve and focused on highlighting the excellence of the compositions being sung, which even divested of their context remain songs of the highest quality. END_OF_DOCUMENT_TOKEN_TO_BE_REPLACED

I was adamant that I didn’t want to see this production of Evita for so long and I am not really sure why. But having announced its closure and with some good ticket deals floating around, I finally took the plunge and boy, was I wrong. Central to this revival of the 1978 Andrew Lloyd-Webber and Tim Rice collaboration was the casting of the Argentinean Elena Roger to take on the title role of this rags to riches story of the second wife of Argentinean president Juan Perón, Eva Duarte, whose controversial rise to power captured the hearts of some, thoroughly alienated others but ensured her a lasting legacy as one of the most colourful political leaders.

From the opening number, I could feel something exciting happening, a certain energy on the stage, which then exploded in a joyous version of ‘Buenos Aires’ filled with ecstatic singing, tight Latin-inspired choreography and I just loved it, I was ready for giving a standing ovation from then on! The incorporation of a real Latin American feel into both the music and choreography gives the show a real injection of authenticity which lifts it into the stratosphere. END_OF_DOCUMENT_TOKEN_TO_BE_REPLACED