It’s a season that start off tremendously, the serial killer vibes of ‘A Guilty Mind’ and the decades-spanning effects of ‘Lost’ offering up a different take on forensics for once. But towards the end of the run, it is clear that a decision has been made (who knows by whom) to give Harry more to do and that throws things off balance. END_OF_DOCUMENT_TOKEN_TO_BE_REPLACED

Not really news, more a heads-up to this brilliant piece in the Guardian which covers the 30-odd years that Tristram Kenton has been taking pics for the Guardian’s theatre coverage. Highly recommended: https://www.theguardian.com/stage/gallery/2020/jul/30/caesar-cilla-and-a-superstar-cast-tristram-kentons-stage-archive-in-pictures 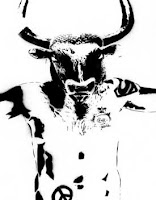 The title of Boiling Frogs refers to an alleged phenomenon which should be familiar to fans of Christopher Brookmyre’s books and is an apt metaphor for this, The Factory’s first ever full-length original play. Usually known for reinterpreting classic plays and hugely interactive scenarios (the audience bringing along random props to be used and getting to pick who will play each part), Steven Bloomer has written a play set in a police cell in a world not too dissimilar from our own but where global warming has hit hard, the fallout from a riot called the Battle of Birmingham is on everyone’s lips and capital punishment is being introduced for terrorists.

The first people we see in the cell are Mark, a keenly intelligent professional protester arrested for impersonating a police officer and the policeman who is trying to interview him and avoid getting himself tied up in Mark’s word games and constant assertions of his civil rights. As the play progresses, George is then thrown into the cell, another protester who was at the same picnic in Parliament Square and then Tom, a policeman being held for overstepping the line. A sergeant also appears periodically to ratchet up the tension as the walls both metaphorically and literally begin to close in and the three prisoners are forced to face up to what they have done and what they believe is right. END_OF_DOCUMENT_TOKEN_TO_BE_REPLACED