“I have no name for the thing which is in my head. It is not envy. It is more than envy. It does not scare me. I must look close enough to discover what it is”

It’s no secret that Yaël Farber creates the most immersive of worlds in her theatre but it is still a sensory thrill to allow yourself to submerge entirely into it. The growling rumble of Isabel Waller-Bridge’s score is a thrumming backdrop to the striking splendour of Soutra Gilmour’s set – all stone and earth and timber, an elemental space for the almost ritualistic unfolding of this pre-industrial play.

And if Knives in Hens seems grim and dark (Tim Lutkin lights with remarkable economy), Farber introduces a repeated motif of flashes of white – the scattering of plucked feathers, plumes of flour billowing through the air, the gentle fall of snowflakes caught just so in the light, hell even the pale sculpted muscularity of a (surely anachronistically tattooed) bare arse establishing early on the internal dynamics. END_OF_DOCUMENT_TOKEN_TO_BE_REPLACED

Oh The Halcyon – shafted by the overwhelming desire for it to be the new Downton, or maybe the unfriendly Monday evening slot, or maybe the fact that Charlotte Jones’ serial never quite honed in on what it wanted to be. Following the fortunes of a luxury London hotel during the first couple of years of the Second World War, it took all possible opportunities to explore a society on the cusp of major change. But between the aristocrats who owned it, the aristocrats who stayed there, the lower classes who work there, and the multitudes of people affiliated to all these lives, the canvas was far too wide.

The hints were there right from the off in episode 1 which struggled to introduce even just its leading players in its running time, whilst still proving most tantalising, due to its cracking cast and its sumptuous design (those costumes!). At the heart of The Halycon lay the antagonistic relationship between Olivia Williams’ Lady Hamilton and Steven Mackintosh’s Mr Garland, owner versus manager as they butted heads over practicalities in the face of an ensuing Blitz but though their scenes were electric, they were given too little too late together to exploit this to its fullest.  END_OF_DOCUMENT_TOKEN_TO_BE_REPLACED

Christine Edzard will be writing and directing a new version of The Good Soldier Schwejk, based on the satirical Czech novel by Jaroslav Hašek, and creating a daring theatrical and filmic experience.

Published in serial form, The Good Soldier Schwejk became an instant success. Hažek died in 1923 leaving the novel unfinished. By 1926 it was translated into German and spread across Europe, acquiring cult status. Since then, the good soldier has appeared in many forms across the world, as a powerfully comic symbol of anti authoritarianism, anti militarism and resistance.

Edzard will present a contemporary ‘take’ on Hašek’s original, in an unconventional, rule-breaking adaptation. The subject of Edzard’s film is in fact a play, a comedy, which she has scripted as a live, cabaret style performance. Her Schwejk will be filmed from curtain up to curtain down as performed over the course of a week in the intimate wooden theatre at Sands Studios in Rotherhithe. The compression of Hažek’s sprawling novel into cabaret form will add bite and contemporary relevance to the satire. The Cabaret form also reflects the background of Schwejk’s original creator – Jaroslav Hašek was a frequent performer of politically engaged cabaret in Prague.

will take on multiple roles and there will be live music and (partially scripted) audience participation. Editing will take place after the shoot in the normal way

It all sounds very intriguing indeed (follow their Twitter here for more info) and I’m pleased to be able to share some rehearsal images for Good Soldier Schwejk with you below. END_OF_DOCUMENT_TOKEN_TO_BE_REPLACED

Billing something as the new Downton Abbey is all well and good but for someone who only ever watched the Christmas specials because his parents commandeered the telly on Christmas Day, it’s not actually that much of a pull. What I can’t resist however is Olivia Williams, and Olivia Williams in a period drama in particular, and so I put on ITV for what feels like the first time in ages for The Halcyon.

Set in a swish London hotel of the same name in 1940, The Halcyon looks to be your regular upstairs-downstairs as the aristocratic residents lounge about talking about Nazi sympathisers and swigging gin, while the honest-guv staff scurry around being decent and hard-working and dull and thoroughly unbelievable in the way that they chat so easily with their employers and clientele (just one of the things that bugged me about the little of Downton that I saw). END_OF_DOCUMENT_TOKEN_TO_BE_REPLACED

“What art thou, thou idle ceremony?”

Early days for the final instalment in Michael Grandage’s season at the Noël Coward and another return to Shakespeare. But the Jude Law-starring Henry V did little to entertain, not helped by an abortive start which meant the opening scenes had to be replayed, with a production that is full of Acting with a capital A but little sense of theatrical vibrancy. Truth be told, I think I’m done with the play for a while – last year saw a slew of adaptations, some more successful than others, and so it doesn’t feel like a necessary addition to our stages (though I appreciate not everyone will be in quite the same position.)

Part of the problem is soon apparent with the sneaking suspicion that we’ve been here before. Longtime collaborator Christopher Oram’s distressed wood set recalls the Donmar’s Lear, the throne as icon imagery their Richard II. Ashley Zhangazha’s Chorus arrives onstage in modern dress (with what looks suspiciously like a Viva Forever t-shirt) but this is a red herring as the play is performed in classic dress, although Law’s soldier King is frequently attired in some distractingly tight-fitting trouser-wear.  END_OF_DOCUMENT_TOKEN_TO_BE_REPLACED

When the Donmar first announced its West End season, taking residence in the Wyndhams theatre, there was a special offer if you bought tickets for ll four productions at the same time, so incredibly, I’ve had a ticket for Hamlet for over 18 months! Indeed the entire run had been sold out for quite some time before it even opened, such was the draw of Jude Law’s name as Shakespeare’s eponymous Dane.

The weight of expectation must have been huge on Law’s shoulders. Not only was he following a superlatively-received Hamlet at the RSC with David Tennant, there has been a case of somewhat diminishing returns on the Donmar’s experiment, with Madame de Sade in particular disappointing many after Ivanov’s excellent start. So the sound of gleeful knives sharpening was strong, with a lead actor more known for his looks than acting talent these days taking a lot of flak before he had even started his run. END_OF_DOCUMENT_TOKEN_TO_BE_REPLACED 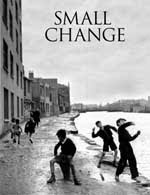 Partly based on his own experiences as a boy in Cardiff, Small Change is one of Peter Gill’s earlier plays, revived here at the Donmar Warehouse. It covers the efforts of two boys in 1950s Cardiff to remove themselves from their mothers’ apron strings, but also with the complex relationship between the two, struggling to grasp their true feelings for each other in a world where homosexuality is incomprehensible and illegal. But as it is a memory play, we also see the characters later in life and the action flits around the timeline showing how the past and present are inextricably linked and indeed their impact on the future.
The extremely simple staging, just four chairs at random angles, a floating shelf on a brick wall at the back and an unadorned red raked stage means that the focus is squarely on the prose which is heavily poetical. But whilst there is no doubting the quality of the acting onstage and the obvious emotion invested in the depiction of unresolved homosexual yearning and the drudgery of housewifery, it rarely fully captivated the attention as it is just so very lyrical and Gill’s writing often veers to the elliptical and obtuse.
This is partly due to the structure: the play constantly shifts around in time with repeated lines and recurring motifs echoing around but instead of being moving, I found myself getting increasingly irritated with the repetition. And there seemed something a little artificial about the evocation of working class language, a romanticism which was a little too rose-tinted for my liking.
The acting is predictably strong, led by the incomparable Sue Johnston with her stoic and strong Mrs Harte contrasted with Lindsey Coulson’s much more nervous and despairing Mrs Driscoll, struggling under the weight of a large family and brutal husband. Matt Ryan and Luke Evans had a lovely chemistry as the two boys who never quite managed to chase the dream of love between the two, each following their own paths. On the one hand it was nice not to see full-blown ‘pretending to be children’ acting from these two but equally, the subtlety with which it was played meant that it was never abundantly clear just when we were in the storyline.
Dull and uninvolving feels too harsh a description for this production given the strength of the acting, but I would struggle to recommend this to people as it ended up being quite a difficult play to like.