“We have to act happy”

First things first – Sonia Friedman’s RE:EMERGE season, re-opening the Harold Pinter Theatre with a programme of three new plays is a brilliant one. Its a visionary take on theatre ownership and one can only hope that it inspires similar boldness elsewhere as the tendency towards the safely tried and tested will surely abound as theatreland looks to find its post-pandemic footing.

And following on from that, there’s also a strange pleasure in seeing a play that I wasn’t particularly keen on and saying so, a sense of returning to normalcy (as opposed to the contortions pulled when everyone had to pretend Sleepless in Seattle the musical was the brave new hope last summer…). So for me, despite a dreamy cast including Gemma Arterton and Lydia Wilson, Amy Berryman’s Walden wasn’t the one. END_OF_DOCUMENT_TOKEN_TO_BE_REPLACED

New West End play Walden is set on 22nd May 2021 at the Harold Pinter Theatre as the first instalment in Sonia Friedman Productions’ new season RE:EMERGE by . The debut play from Amy Berryman, starring Gemma Arterton, Fehinti Balogun and Lydia Wilson, will be directed by Ian Rickson. 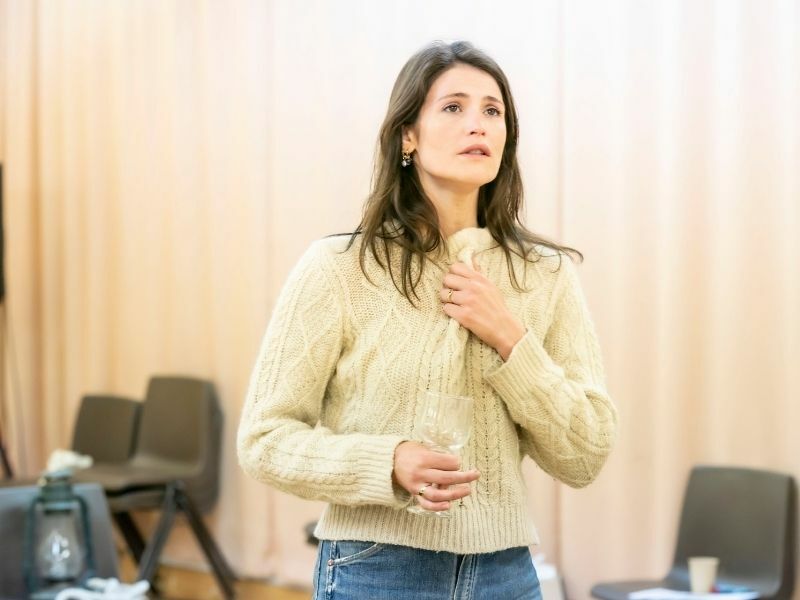 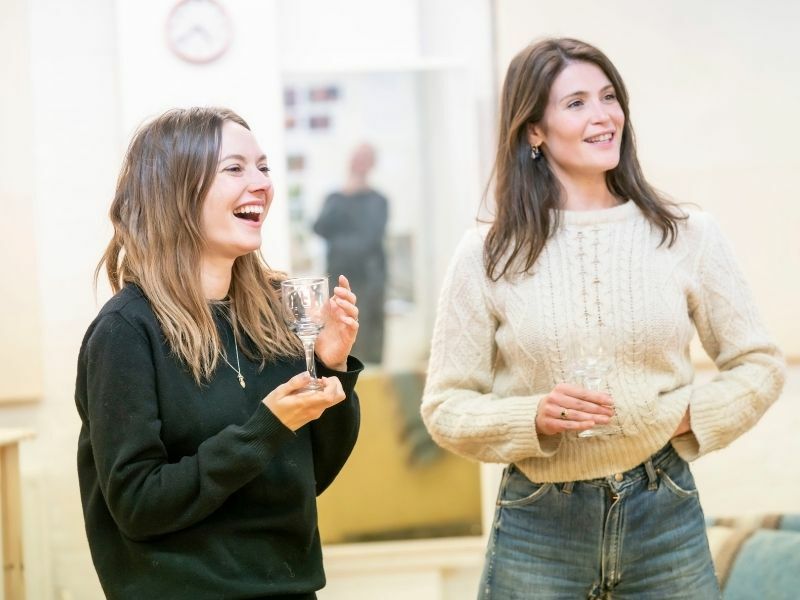 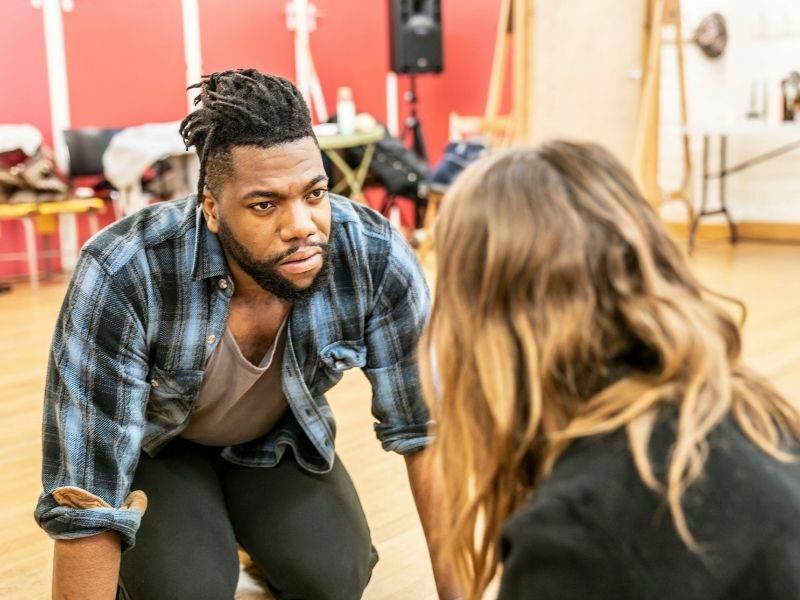 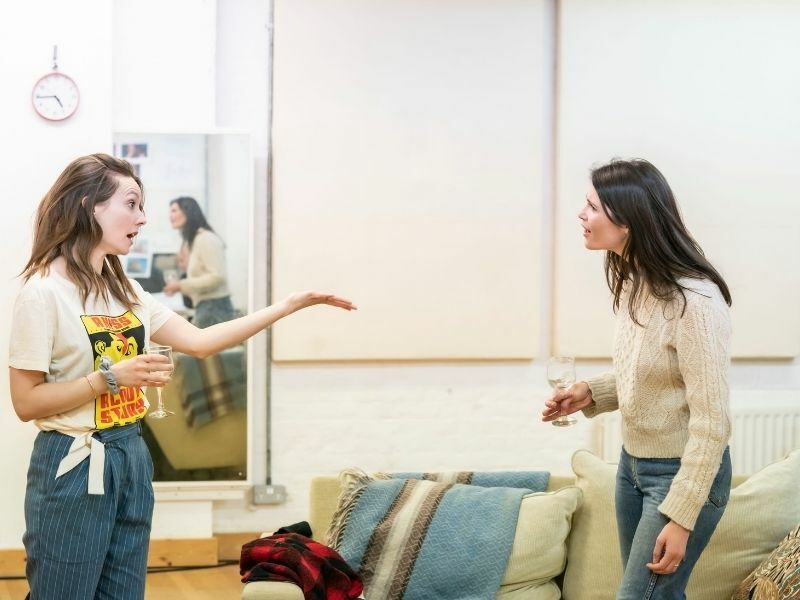 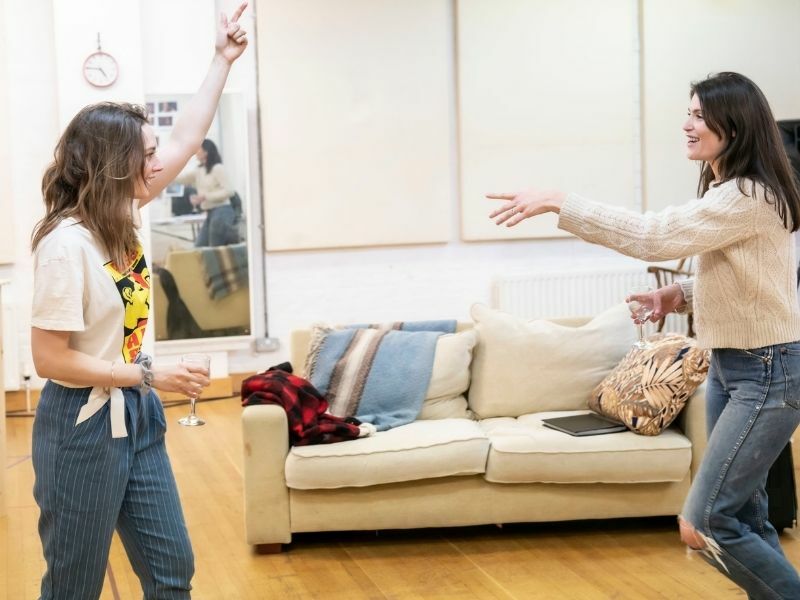 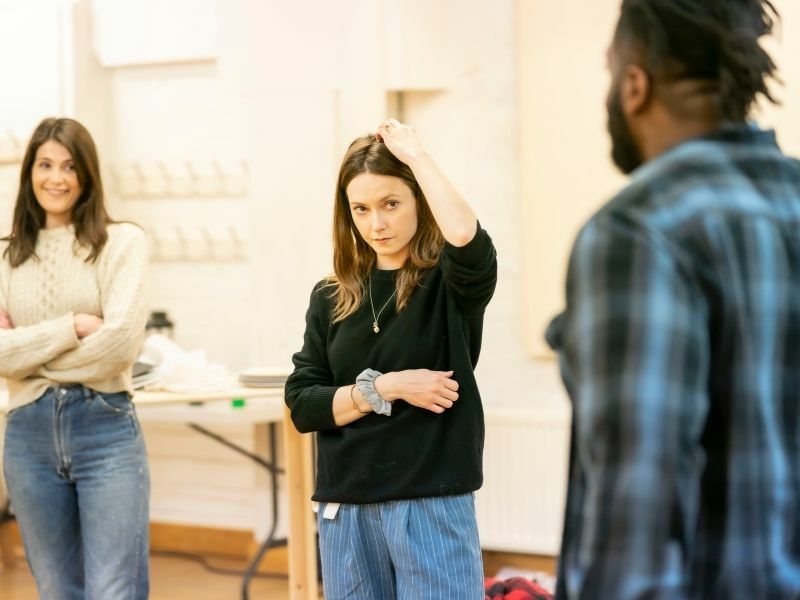 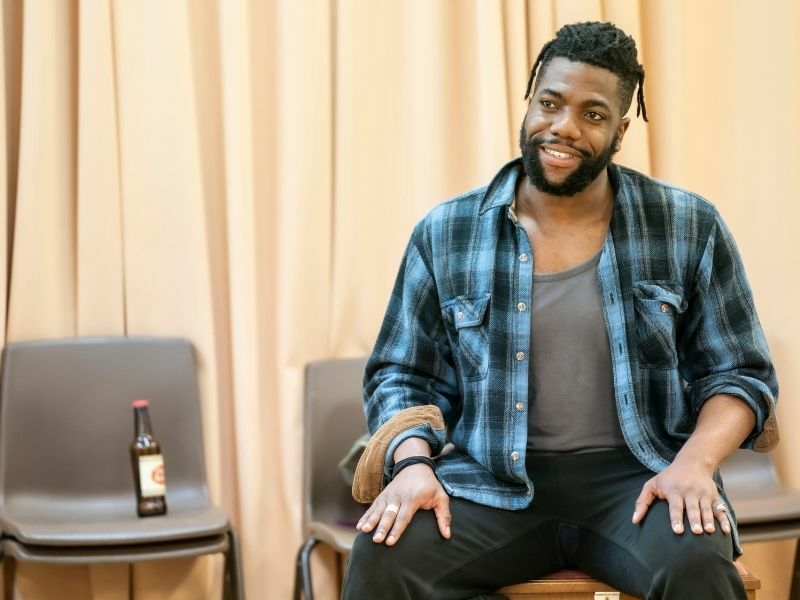 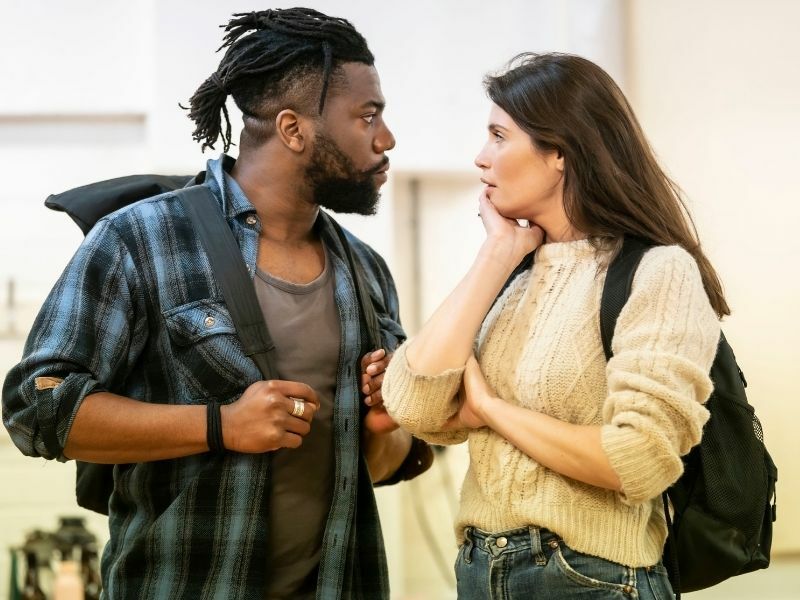 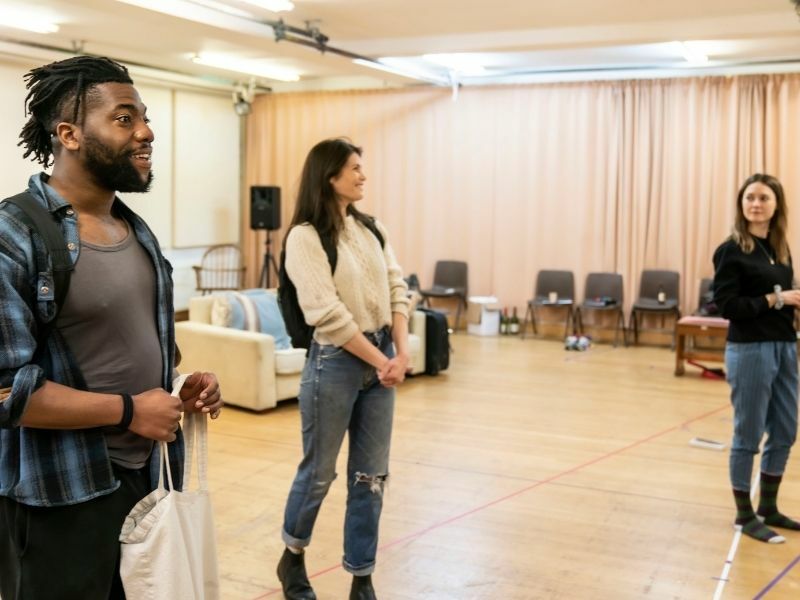 Following a year of extraordinary challenges, and as British theatre begins to find ways to re-emerge from the devastating impact of the enforced shutdown, SFP today announces a season of new plays for a new world. The RE:EMERGE season will create a space for vital, new voices and fresh talent in the West End and beyond, working alongside some of the industry’s greatest theatremakers and artists. The extraordinary collection of plays curated by SFP alongside Ian Rickson – who becomes Artistic Director for the season – tackles urgent issues integral to rebuilding our society, including structural inequality, climate change and the economics of truth in an internet age. Supported by Arts Council England, RE:EMERGE will support the theatre-makers of the future, provide vital work for the freelance community and celebrate the live experience as we begin to build back to the full reopening of British Theatre.

The RE:EMERGE season intends to open to socially-distanced audiences from May to help re-open and re-energise our theatres, and will be staged in a Covid safe environment following government advice and adhering to social distancing guidelines; and in line with Society of London Theatre & UK Theatre’s See It Safely campaign. Alongside the season, SFP also intends for the comedy The Comeback to return to the West End following its enforced shutdown in December. END_OF_DOCUMENT_TOKEN_TO_BE_REPLACED

It is Sarah Kane’s turn to get the Tristram Kenton treatment from the Guardian’s archive, and what an impressive array of talent that have understandably flocked to this most challenging of playwrights:
https://www.theguardian.com/stage/gallery/2020/oct/28/blasted-cleansed-best-of-sarah-kane-in-pictures-tristram-kenton

“You spent so long putting words into other people’s mouths, you think it only matters what is said”

A most curious one this, continuing our creative obsession with filling in the biographical gaps in the life of William Shakespeare (cf Shakespeare in Love;  Anonymous; Dedication; Will). All Is True is written by Ben Elton, who has (comic) form in the shape of Upstart Crow, the TV show soon to make its own theatrical bow and has as its director, producer and star, one Kenneth Branagh.

In some ways, it is a beautiful film. Branagh eschews a lot of artifical lighting and flickers of candlelight illuminates several interior scenes to gorgeous effect. He also takes pains to find interesting angles for his shots and the opening image of his silhouetted figure against the burning Globe is stunning. And being able to call on the likes of Sir Ian McKellen (the Earl of Southampton) and Dame Judi Dench (Anne Hathaway) to toss off some Shakespeare recital is of course an unalloyed pleasure. END_OF_DOCUMENT_TOKEN_TO_BE_REPLACED

Set in the seedy underbelly of Victorian London, the story follows Romola Garai’s courtesan Sugar and the relationship she develops with feckless perfume heir William Rackham, a persuasive Chris O’Dowd. From a flop of a first night, he soon becomes entirely infatuated with her, not letting the fact that he has a mentally ill wife get in the way. END_OF_DOCUMENT_TOKEN_TO_BE_REPLACED

On the first day of Christmas, Black Mirror gave to me…a politician fucking a pig.

Can Charlie Brooker ever have conceived that four years after The National Anthem aired, the theme of his first episode of Black Mirror would actually come horrifically to life as Lord Ashcroft’s biography of David Cameron alluded to unsavoury acts with a pig’s head. END_OF_DOCUMENT_TOKEN_TO_BE_REPLACED

“You do nothing but repeat yourself”

And so the Found111 experiment comes to an end with this final production in the upper reaches of the former Central St Martins space. Emily Dobbs Productions has put together quite the programme of plays over the last year or so (The Dazzle, Bug, Unfaithful) with some astute casting decisions (Andrew Scott, James Norton, Matthew Lewis) bringing the buzz to the venue from the off. It’s not been unproblematic – its lack of access for one – but one of its issues has now been addressed with the introduction of allocated seating for the final play of this season.

That play is Sam Shepard’s Fool For Love and once again the casting has a hook to it, this time reuniting Ripper Street Series 3 couple Adam Rothenberg (making his London stage debut) and Lydia Wilson as ill-fated lovers Eddie and May. He’s tracked her down to the motel room in the Mojave desert to where she’s escaped and he’s determined to whisk her back to life in Wyoming. But as they squabble and fight, we see that this is a dance that’s been played out before, their’s is the kind of love you can’t live with or without, they just keep on coming back for more. END_OF_DOCUMENT_TOKEN_TO_BE_REPLACED

“In Whitechapel, they die every day”

When low ratings for series 2 of Ripper Street saw the BBC decide to pull the plug on it, it was something of a surprise to hear Amazon Video would be taking it over (this was 2014 after all) in a deal that would see episodes released first for streaming, and then shown on the BBC a few months later. And thank the ripper that they did, for I’d argue that this was the best series yet, the storytelling taking on an epic quality as it shifted the personal lives of its key personnel into the frontline with a series-long arc to extraordinary effect.

And this ambition is none more so evident than in the first episode which crashes a train right in the middle of Whitechapel, reuniting Reid with his erstwhile comrades Drake and Jackson four years on since we last saw them. A catastrophic event in and of itself, killing over 50 people, it also set up new villain Capshaw (the always excellent John Heffernan) and brilliantly complicated the character of Susan, promoting her to a deserved series lead as her keen eye for business, and particularly supporting the women of Whitechapel, throws her up against some hard choices. END_OF_DOCUMENT_TOKEN_TO_BE_REPLACED