‘My hands are shaking you know. I haven’t been so keyed up about anything since I was the Virgin Mary.’

Directing Talent is Paul Foster (Kiss Me, Kate). Originally scheduled for the summer of 2020, Talent tells the story of a young woman with dreams of showbiz glory. END_OF_DOCUMENT_TOKEN_TO_BE_REPLACED

Since it is the season of goodwill to all men, I’m not going to belabour the point that it is a shame that ‘musicals’ have been lumped together as a category here, whereas the likes of Pinter and Kane got their own specials, whither Sondheim, Herman and Tesori. Still, it’s lovely as ever to stretch back over years of musical theatre productions to see some of Tristram Kenton’s most iconic shots for the Guardian:
https://www.theguardian.com/stage/gallery/2020/dec/02/musicals-on-stage-in-pictures-tristram-kenton

Follies 2019 remains the show that I need right now

Just a quickie for this revisit to Follies, which remains as perfect a piece of musical theatre as I could hope for. I loved it then but I really love it now, Joanna Riding is just heartbreakingly perfect as Sally, she really brings something to the role that somehow eluded Imelda Staunton (for me at least), Alexander Hanson is superb in tracing Ben’s tragic fall, and Janie Dee and Peter Forbes maintain their stellar work as Phyllis and Buddy (seriously, Dee is a proper showstopper).

And as is surely appropriate in Dominic Cooke’s production, ghosts of the past interplay with what we’re seeing from top to bottom. It was great to see Dame Felicity Lott as Heidi, a different but no less affecting proposition than Dame Josephine Barstow (there truly ain’t nothing like a…). And the young talents of Gemma Sutton, Ian McIntosh, Harry Hepple and Christine Tucker are eloquently elegant as the younger incarnations of the central quartet. END_OF_DOCUMENT_TOKEN_TO_BE_REPLACED

The Olivier Award-winning Follies returns to the National Theatre in richer, deeper, more resonant form and just blows me away

Like the ghosts of their younger selves that haunt the characters in Follies so beautifully in this production, for those who were lucky enough to catch its superlative Olivier Award-winning 2017 run, so too do our memories interplay with what we’re seeing, inducing some soul-shiveringly exceptional moments that are almost metatheatrical in the feelings they provoke.

The tingle of anticipation is never far away but the show somehow feels richer, deeper, more resonant in the note of melancholy it strikes as it exposes nostalgia for the rose-tinted self-delusion it so often becomes. Janie Dee’s Phyllis somehow feels more desolate, especially in her bitterly brilliant ‘Could I Leave You’; Tracie Bennett scorches the roof once more in ‘I’m Still Here’ in what feels like a more internal performance now; we’re all at least a year older… END_OF_DOCUMENT_TOKEN_TO_BE_REPLACED

“You can try to stop my dancin’ feet”

This mahoosive new tour of Hairspray started in the middle of last month and stretches right through to June 2018 and it certainly feels like it has the potential to be a great success. There are some cracking performances which really elevate Paul Kerryson’s production of this most effective of shows (music by Marc Shaiman, lyrics by Scott Wittman and Shaiman, book by Mark O’Donnell and Thomas Meehan) and choreography from hot-shot of the moment Drew McOnie.

And given how dance heavy Hairspray is, it is an astute move from Kerryson as McOnie’s inventive use of movement establishes and reinforces so much of the febrile mood of simmering racial tension and potential societal change. In the hands of the likes of Layton Williams’ Seaweed and an effervescent ensemble, it’s hard to keep a smile from your face as the sheer toe-tapping enthusiasm of it all as fabulous group numbers shake and shimmy their way across the stage. END_OF_DOCUMENT_TOKEN_TO_BE_REPLACED

As unlikely as it may seem, you could easily make the case that some of the best musical theatre happening in London right now is taking place above a pub in Highgate. John and Katie Plews’ Ovation Productions have a sterling record in small-scale smash-hit musicals at the Upstairs at the Gatehouse theatre and their festive shows are usually the pick of the bunch. This winter sees them take on the perennial classic Singin’ in the Rain and naturally, it is a gloriously resounding success. And yes, of course there is rain – you gotta go to see how they do it though.

The key to the Plews’ triumph lies in the uncanny ability to both distil and reimagine Broadway classics perfectly for this 120-or-so seat space and often in traverse. That means choreography (from Chris Whittaker) so audacious that audiences applaud mid-song, that means design (by Sarah June Mills) that hits all the key notes – a lamppost to lean on, steps to hop up and down on, seats to tip back – without cluttering the stage, that means musical direction (from Matt Ramplin, leading a band of six) unafraid to just exude Broadway pizzazz as it delivers the superbly evergreen score. END_OF_DOCUMENT_TOKEN_TO_BE_REPLACED 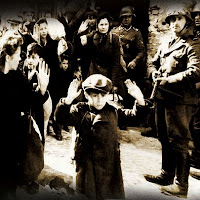 “What should we do when everyone acts less than human? We must act more than human.”

The true life story of Janusz Korczak a Polish Jew who protected some 200 children from some of the worst horrors of the Second World War may not seem a likely subject for a piece of musical theatre but strange as it may seem, it works with a devastating precision. It was written in 1998 for youth theatre groups by Nick Stimson (book and lyrics) who also directs here and Chris Williams (music) but this version is presented here by Youth Music Theatre – the UK’s leading national music theatre company for young people – at the Rose Theatre in Kingston.

In Liz Cooke’s stark, wire-caged design with occasional shots of video, the story moves from the orphanage Korczak set up in the Polish countryside, inspired by those he saw in England, where he attempts to shield the children from the war that is ripping their country apart, to the Warsaw ghetto where they are eventually shipped off to as the Nazis’ Jewish solution took hold. But rather than focus on the sadness and horror, the writers tell the stories of these children, the various ways in which they react to the challenges posed to their everyday lives and getting on with the business of growing up, learning about love, humanity and responsibility even as the shadows grow ever darker. END_OF_DOCUMENT_TOKEN_TO_BE_REPLACED