“I wasted time, and now doth time waste me!

Well I didn’t really waste time, I just prioritised. Over the many ways in which Shakespeare’s 400th death anniversary was celebrated and fitting in something of a social life, the Globe’s Complete Walk – specially commissioned bitesize films of each of his 37 plays – just felt like a step too far, plus there was always the assumption (or should that be presumption) that the films would resurface in a more accessible way. And so it seems to be coming to pass, with three of them now available on the BBC’s iPlayer. END_OF_DOCUMENT_TOKEN_TO_BE_REPLACED

“Why must we go over and over the woes of the past?”

There’s something a little unfortunate about labelling your version of Aeschylus’ The Oresteia as “a radical reinvention” when Robert Icke’s extraordinary reinterpretation of the same source material for the Almeida has now successfully transferred to the West End. Nevertheless, Rory Mullarkey’s adaptation for Shakespeare’s Globe also emerges as something rather arresting, not least in director Adele Thomas’ canny use of creatives pushing well outside the visual (and aural) aesthetic normally associated with this venue.

Hannah Clark’s design pulls on a wide range of influences to provide a wealth of striking images – niche cinema like Angelopolous’ The Travelling Players (the almost shifty looking Chorus) and Jodorowsky’s Holy Mountain (Clytemnestra’s magnificent posturing) mix with contemporary security uniforms (the opening messenger) and traditional Greek costumery as we know it (Agamemnon’s battle-dress). Along with Mira Calix’s diverse (including electronics) score, it’s an eclectic mix to be sure but one that pays off to create an out-of-time strangeness which really suits the production.

Mullarkey’s textual adaptation is also an unwieldly collation of disparate elements, poetic rhythm slips into modern-day colloquialisms, epic speeches slides into operatic sung passages. The shifts may be a little jarring at times but again the cumulative effect is rather impressive. The three acts follow the woes of the House of Atreus – Agamemnon sees the war veteran suffer at the vengeful hands of his wife Clytemnestra for sacrificing their daughter, The Libation Bearers sees her suffer at the hands of her son for killing his dad and The Eumenides pops him on trial and established trial by jury, as you do.

END_OF_DOCUMENT_TOKEN_TO_BE_REPLACED

“Love between sexes is war”

Laurie Slade’s adaptation of Strindberg’s The Father was commissioned for Coventry’s Belgrade Theatre last year, but now makes its radio debut as part of Radio 3 season of classics focusing on the changes for women in the late nineteenth century. It is a blistering look at the power struggle in a marriage as two middle-class parents differ hugely on the upbringing of their daughter and clash monumentously in an all-out war to get their own way.

The decks are hardly equally stacked in this version of the battle of the sexes, Strindberg’s own response to Ibsen’s novel take on gender relations in A Doll’s House, as Laura unleashes the limited tools at her disposal to blacken the name of the Captain and cast seeds of doubt about the paternity of Bertha, literally stopping at nothing as the thin line between love and hate drives her to ever more extreme action. END_OF_DOCUMENT_TOKEN_TO_BE_REPLACED

And that’s how I felt in the end about this 2010 Michael Boyd-directed production featuring the Long Ensemble. It is undoubtedly well-performed: Katy Stephens’ bright intelligence is perfectly suited to the determined Rosalind and well matched with Jonjo O’Neill’s passionate Orlando, Richard Katz’s wild-haired Touchstone is well observed and having become accustomed to this group of actors, I liked the smaller parts played by the likes of Christine Entwisle, Dyfan Dwyfor and Charles Aitken. END_OF_DOCUMENT_TOKEN_TO_BE_REPLACED 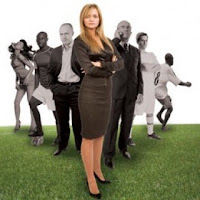 Fitch’s meticulously researched play has taken much inspiration from real life events in the world of football and particularly the murky backroom dealings as ethics are increasingly pushed aside in the race to top the league. The rush to secure foreign investors, the sweeping of numerous scandals under the carpet, the exploitation of young players, the experience of women in such a male-dominated industry, the treatment of loyal fans as profit margins are pushed, there’s a plethora of issues which Fitch folds into the narrative but they just meld into a cacophonous mess that whilst brimming with enthusiasm, lacks any sort of clarity. END_OF_DOCUMENT_TOKEN_TO_BE_REPLACED

At its simplest, Silence follows two main narratives as a married couple pursue different paths: Kate travels to Russia to find Alexei, a man with whom she had a passionate affair more than 20 years ago; and her documentary filmmaker husband Michael with a sound technician colleague is investigating a mysterious Met Police unit whom they suspect of committing misdeeds. But this is a far from simple show as we flow seamlessly between both time and place, some scenes overlapping and even being intercut with one another. END_OF_DOCUMENT_TOKEN_TO_BE_REPLACED

“A man may see how this world goes with no eyes”

A double bill of Shakespeare is something that not even I would undertake lightly but as an opportunity to visit the newly opened Royal Shakespeare Theatre in Stratford-upon-Avon, it was something I couldn’t resist: King Lear in the afternoon for the first time and a revisit of Romeo & Juliet in the evening. Typically, the old maxim about not booking shows to see particular actors came and bit me on the posterior with a depressing predictability, as the main reason for seeing this King Lear was in order to see Kathryn Hunter’s Fool, but as she unexpectedly withdrew from the ensemble at the beginning of the year, the role is now being covered by Sophie Russell.

This was only my second ever Lear, Derek Jacobi’s at the Donmar being the first and whilst I enjoyed seeing that with fresh eyes and not knowing the story, it was nice to watch this one with a little more comprehension of exactly what was going on! Though I was still a little perplexed by the mix of time periods covered in the costumes, the courtiers in classical garb but the outside world seemed to be inspired by the First World War, a mixture that was a little too haphazard for my liking. But overall, it did actually combine to quite epic effect, led by Greg Hicks’ powerful turn as Lear. I got more of a sense of a man going mad from Hicks, as opposed to the fragility, even possible onset of senility, of Jacobi’s interpretation, with his viciousness towards Goneril being particularly shocking in a way I didn’t remember so much. END_OF_DOCUMENT_TOKEN_TO_BE_REPLACED

“Give me my robe, put on my crown; I have immortal longings in me”

Never mind ‘the Scottish play’, it appears that it’s the role of Mark Antony that has some kind of a curse attached to it. Last year saw the Dutch Hans Kesting break a leg before The Roman Tragedies arrived at the Barbican (he delivered a barnstorming performance from his wheelchair), and now Darrell D’Silva is having to perform with his left arm in a sling after suffering severe injuries to his hand after a prop firearm malfunctioned during the technical rehearsal. He has now rejoined the cast after surgery, but press night has been postponed to try and make up some rehearsal time. So my first trip to the Courtyard Theatre at the RSC in Stratford which should have been to one of the final previews actually ended up being earlier in the run than planned.

This is a modern-dress Antony and Cleopatra, featuring guns and suits to tell this great tragic love story of two powerful individuals brought together yet unable to escape their circumstances. Rome is ruled by a triumvirate (what a great word!) after Julius Caesar’s assassination, yet all is not well. Mark Antony has had his head and heart captivated by the Egyptian Queen Cleopatra and is spending more of his time there than in Rome. Taking advantage of this is the ambitious Octavius Caesar who turns on the third triumvir Lepidus, setting the scene for an almighty showdown between the two rivals. END_OF_DOCUMENT_TOKEN_TO_BE_REPLACED

THE SPOTLIGHT BEST ACTOR IN A PLAY
Kenneth Branagh – Ivanov, Donmar West End at Wyndham’s (26.4%)
Adam Godley – Rain Man at the Apollo (18.1%)
Chiwetel Ejiofor – Othello at the Donmar Warehouse (16.5%)
Eddie Redmayne – Now or Later at the Royal Court Downstairs (6.9%)
Ian McDiarmid – Six Characters in Search of an Author at the Gielgud (9.2%)
Kevin Spacey & Jeff Goldblum – Speed the Plow at the Old Vic (22.9%)
END_OF_DOCUMENT_TOKEN_TO_BE_REPLACED

THE SPOTLIGHT BEST ACTOR IN A PLAY
Kenneth Branagh – Ivanov, Donmar West End at Wyndham’s
Adam Godley – Rain Man at the Apollo
Chiwetel Ejiofor – Othello at the Donmar Warehouse
Eddie Redmayne – Now or Later at the Royal Court Downstairs
Ian McDiarmid – Six Characters in Search of an Author at the Gielgud
Kevin Spacey & Jeff Goldblum – Speed the Plow at the Old Vic  END_OF_DOCUMENT_TOKEN_TO_BE_REPLACED