Tackling the constraints of the pandemic in its own way, Simon Annand’s fantastic new book of photos Time To Act has launched a virtual exhibition of some of the photographs which has now been extended to until Christmas. It’s an ingenious way of sharing some of the hundreds of images from the book and should surely whet the appetite for either just buying it now or putting on your list for Santa to collect soon.

END_OF_DOCUMENT_TOKEN_TO_BE_REPLACED

Morgan Lloyd Malcolm’s new play Emilia already looked like one of the top tips of Michelle Terry’s inaugural season at the Globe and with this cast announcement, Nicole Charles’ production fast becomes an absolute must-see!

In 1611 Emilia Bassano penned a volume of radical, feminist and subversive poetry. It was also the first published collection of poetry written by a woman in England. Lloyd Malcolm promises to reveal the life of Emilia: poet, mother and feminist from the 10th August. See you there? END_OF_DOCUMENT_TOKEN_TO_BE_REPLACED

Rebecca Caine – So In Love/Losing My Mind

I missed Caine’s cabaret turn but I was lucky enough to see her give a beautiful rendition of Sondheim’s ‘Losing My Mind’ at a birthday concert a few years – something very special.

END_OF_DOCUMENT_TOKEN_TO_BE_REPLACED

“I never know when I’m going too far but I’m always so glad when I do.”

It was with no little intrigue that I approached watching the boxset of ITV sitcom Vicious – memories of its run from last year focused on the absolute hammering it got, how it had apparently set representations of gay men back centuries and basically broken television. I have to admit to having no interest in watching it from the moment I’d heard about it but clearly something had mellowed by the time I spotted a bargain in a charity shop and sat down to watch Ian McKellen and Derek Jacobi as a long-partnered, long-bickering couple.

Written and created by Gary Janetti (a veteran of US TV including Will & Grace) and Mark Ravenhill (a UK playwright of no little renown), it is an homage to, or more accurately a riff off, the world of 1970s sitcoms with its single living room set where Freddie and Stuart bitch away at each other all day long. They’re frequently joined on the sofa by barely-tolerated fag hag Violet, a deliciously fruity Frances De La Tour, and their newly arrived eye candy neighbour, the handsome but heterosexual Ash played by Iwan Rheon, and that’s pretty much your set-up from which endless capers abound. END_OF_DOCUMENT_TOKEN_TO_BE_REPLACED

The second half of the International Playwrights Season at the Royal Court shifts its focus to new Eastern European writing. I attended the first reading last week, of Pavel Pryazkho’s The Harvest, but the main show, playing upstairs, is Latvian-based playwright Aleksey Scherbak’s Remembrance Day, presented here in a translation by Rory Mullarkey.

On 16th March, veterans of the Latvian Legion of the Waffen SS march through the capital Riga, increasingly being joined by other native Latvians as a celebration of their national independence against Soviet oppression. The complicating factor though, being that in order to fight the Soviets, they had to align themselves with the Nazis. The march therefore is a focal point for tensions as both anti-fascist and fascist movements in the country seek to capitalise on the emotions provoked here to promote their own agendas. Sherbak’s play uses the tensions in a Russian-speaking family to explore this struggle as teenage Anya finds herself becoming more and more radicalised as a political activist whilst her father’s attempt to preach a calmer message of tolerance is misinterpreted and whips up an intense fervour of damaging extremism. END_OF_DOCUMENT_TOKEN_TO_BE_REPLACED

THE CAPITAL BREAKS BEST ACTOR IN A PLAY
Jude Law – Hamlet, Donmar West End at Wyndham’s
David Harewood – The Mountaintop at Theatre 503 & Trafalgar Studios 1
Dominic West – Life Is a Dream at the Donmar Warehouse
Ken Stott – A View from the Bridge at the Duke of York’s
Mark Rylance – Jerusalem at the Royal Court Downstairs
Samuel West – Enron at the Royal Court Downstairs  END_OF_DOCUMENT_TOKEN_TO_BE_REPLACED 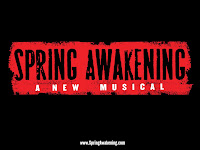 Spring Awakening comes to London from a successful run on Broadway, where it won 8 Tony awards and had great word-of-mouth buzz, several State-side friends had recommended it to me, saying if I loved Avenue Q, I would love this. Unfortunately, this did not turn out to be the case, after hacking through the snow to Hammersmith.

Crucially for a musical, the tunes just aren’t memorable, and there didn’t seem to be the magical connection between the music and the lyrics necessary for this score to engage once the curtain had come down. If anything, it almost tries too hard, as exemplified by the song Totally F*****: the play seems so pleased with itself at this “shocking” material and yet it seems almost quaint that

the over-use of an expletive is considered to be cutting-edge. END_OF_DOCUMENT_TOKEN_TO_BE_REPLACED