God-tier guest casting, daring deviation in the storytelling and Leo getting hit on the head, Series 13 of Silent Witness is probably one of my absolute faves

“Your kind think you’re some kind of heroic martyr, you won’t be told or fobbed off. If people get dragged into your mess then it’s jolly unfortunate but you don’t give a shit because you have right on your side”

Now this is the good stuff. Series 13 of Silent Witness opted to shake things up just a little more than usual and the result, for me, is one of their most effective seasons to date. For one, having Leo be the one who is attacked rather than Nikki is (three series on the trot in case you’d forgotten) is just nice for the variety but adding a note of frailty into this most sanctimonious of characters works well.

It also sets up a cracking episode which sees Nikki and Harry at loggerheads as they take the same evidence and end up with wildly different conclusions which they’re then forced to defend in court. And a campus shooting episode, whilst having hardly anything to do with forensic pathology, is brilliantly conceived and chillingly executed. Fresh takes on the storytelling really makes this series feel alive. END_OF_DOCUMENT_TOKEN_TO_BE_REPLACED

“The England we once knew has gone”

For whatever reason, it took four years for the Philippa Gregory TV adaptations to restart with The White Princess following on from The White Queen. And it is a series saved by the introduction of Michelle Fairley and Essie Davis as the feuding mothers of Henry VII and Elizabeth of York, intent on relitigating the Wars of the Roses even as the marriage of their children was meant to have ended it.

A pre-Killing Eve Jodie Comer and Jacob Collins-Levy take on the roles of the couple forced together in the name of their country. With years of enmity between their houses and any number of horrific, murderous actions committed by them or in their names, it does require a fair bit of remembering your history lessons (or the first series) as so much is carried over. It does make you wonder a little why only one cast member (Caroline Goodall) was carried over from The White Queen. END_OF_DOCUMENT_TOKEN_TO_BE_REPLACED

In which the rollercoaster of quality rockets sky-high again, Series 7 of Spooks ranks as one of my favourites

The introduction of series-long plots didn’t necessarily work first time round for Spooks but in Series 7, the magic certainly happens to produce one of the best seasons across its decade-long life. Perhaps the reduced episode order from 10 to 8 helped to refine the effectiveness of the storytelling, recognising that it was Adam’s time to go definitely worked and finally made the right kind of room for Ros to rise, and giving Gemma Jones this material was an absolute masterstroke.

Undoing the silly fakeouts of Ros and Jo’s ‘deaths’ right from the off, the introduction of Richard Armitage’s Lucas North also works well, his time in Russian captivity casting a nice shade of doubt over his presence in the team, a marked difference to the alpha males of Tom and Adam. And the ongoing Sugarhorse mystery is skillfully wound throughout the whole season, coiling ever-tighter until the hammer blows of a properly fierce finale.

Nicola Walker-ometer
She’s just a distant memory at this point – Harry really is such a fuckboy. END_OF_DOCUMENT_TOKEN_TO_BE_REPLACED

I’ve been a big fan of Mike Leigh’s film work, since discovering it in the last decade or so, and loved his last film Mr Turner. So news of his return to period drama, albeit through his idiosyncratic process, in Peterloo was a plus for me. The reality though is an epic that proved a real slog for me, even boring by the end. END_OF_DOCUMENT_TOKEN_TO_BE_REPLACED

A quick whip through Series 2 of The Crown

“History is not made by those who did nothing”

Do I still love The Crown? Yes. Do I still find it a little hard to muster enthusiasm about it until I’m watching it. Absolutely. It remains lavish prestige drama that carries little excitement about it and that’s perhaps inevitable as it trundles through the decades of the second half of the twentieth century, little dramatic surprise can really be sprung.

Instead, the thrills come from the script of Peter Morgan’s fantasia into the emotional life of our monarch, and a production that looks like the multi-millions of dollars that have been spent on it. Oh, and the cream of British acting talent popping in for a scene or two at an astonishingly high rate. END_OF_DOCUMENT_TOKEN_TO_BE_REPLACED

“The Black bird has landed”

It’s only taken me, ooh, a couple of years to get round to watching Cilla, a 2014 ITV miniseries written by Jeff Pope, in which time the small matter of Cilla Black’s passing has made it a more poignant piece. My main reason for watching though, its arrival on Netflix aside, was to finally catch up with Sheridan Smith’s portrayal of the Liverpudlian light entertainment behemoth, back in the days when she was just a Scouse lass called Priscilla White.

Pope’s script definitely has a touch of the rose-tinted about it but there’s no denying the amazing energy of Liverpool’s music scene in the 1960s that comes across in the first two episodes. Though she has a job as a typist – her mother proudly proclaims “the first in the family to be considered suitable for office work” – Cilla dreams of being a singer and is making quite the name for herself on the club circuit, building a following through club performances with upcoming bands such as a quartet called The Beatles. END_OF_DOCUMENT_TOKEN_TO_BE_REPLACED

“You believe in laws but there are only lechers”

For some reason or other, I stopped watching the second series of Ripper Street midway through and it’s taken me until now to finally finish it. It wasn’t that I didn’t enjoy it, it’s more likely to do with running out of time to watch it on the iPlayer or something but anyhoo, I’ve managed it now. My review of Series 1 (which I thoroughly appreciated) is over here and I have to say that that enjoyment has continued, even if I do have a few reservations about its female voices.

It’s a shame that in a crime procedural led by three men, two of the leading supporting female characters did not return for this second series. DI Reid’s wife and kind-of-mistress (Amanda Hale and Lucy Cohu) are both MIA, losing all the work done to establish them, and though Leanne Best is introduced as a local politician who can’t help but flirt with Reid (he’s played by Matthew Macfadyen after all), the overall weight of the series does thus feel a little unbalanced. END_OF_DOCUMENT_TOKEN_TO_BE_REPLACED

“It’s exactly like yours, but the other way around”

As any fule kno, purple underwear had its cultural apotheosis in Back to the Future but there’s a scene in Catherine-Anne Toupin’s Right Now (À Présent) that threatens to wrest that title from Michael J Fox and anoint the delicious Maureen Beattie in his place. But lingerie aside, there’s much more in play in this fascinatingly twisty piece of writing from this Québécois playwright, a transfer from Theatre Royal Bath’s Ustinov Studio which has already toyed extensively with our perceptions in The Father and The Mother which have also been exported down the M4 in recent months.

Here, it’s Alice who has tumbled down the theatrical rabbit-hole into a world of increasing strangeness. Installed in a swanky new apartment with doctor husband Ben, life ought to be swell but there’s clearly something awry – their physical intimacy is severely stilted, a child’s toy left on the floor provokes the tensest of exchanges, her sleeping patterns are wrecked and he’s working all the hours God sends. All the while, a baby’s cries haunt the room… So the arrival of orchid-bearing Juliette from across the hallway, along with son François and husband Gilles and their promises of drinks and dinner parties ought to release the pressure valve – after all everybody needs good neighbours. END_OF_DOCUMENT_TOKEN_TO_BE_REPLACED 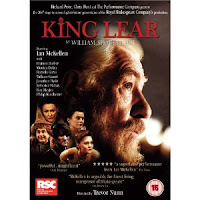 And what a bonus it is. McKellen is simply outstanding here. Jacobi’s Lear for the Donmar was my first ever and I couldn’t imagine it ever being bettered, Greg Hicks’ recent RSC one was just different, but this is such an incredibly visceral performance, full of anger and rage and bewilderment that is highly affecting even on screen – what it must have been like live I can’t imagine, but the camera captures every single nervy tic and nuanced touch that must have been missed in some of the larger theatres. And facing up against him is Frances Barber as Goneril in what must be one of the performances of her lifetime. She is just astounding, all kinds of manipulative, Machiavellian evil as she plots her way through the play, but almost justifiably so as the fierce tragedy carved on her face as her father curses her indicates the troubled history between father and daughter. This is the type of performance that makes you wish the sisters were featured much more in the play. Monica Dolan’s Regan is also tremendously strong, a more nervous, unhinged energy that plays out maliciously as she caresses the text languorously and Romola Garai’s Cordelia is beautifully spoken and extremely moving. END_OF_DOCUMENT_TOKEN_TO_BE_REPLACED

“Vengeance is mine. Ay, heaven will revenged of every ill”

The Spanish Tragedy was written by Thomas Kyd in the 16th century and is regarded as one of the first ever examples of the revenge tragedy. Kyd’s play proved to be highly influential on other Elizabethan writers such as Marlowe, Jonson and indeed Shakespeare, Hamlet in particular takes much inspiration from several key elements of this play. It is presented here at the Arcola Theatre in Hackney, one of the most interesting fringe venues in London, with a great cafe and bar for pre/post-show interactions.

In the aftermath of a bloody war, the royal leaders of war-torn Spain and Portugal plan a marriage between their families in the hope of forging peace. But the bride already has a secret lover. When he is murdered to make way for the new groom, his father Hieronimo is forced down a brutal path of vengeance from which there is no return. Watched throughout by the ghost of a soldier and Revenge, personified here by a chillingly played, creepy little girl, there seems no doubt about the inexorable path of vengeance that Hieronimo takes, the implication being that their supernatural influence is guiding the grieving father. Yet the heart of the play is more about the human reaction to being wronged, and the pervasive need for retribution, no matter the consequences. END_OF_DOCUMENT_TOKEN_TO_BE_REPLACED