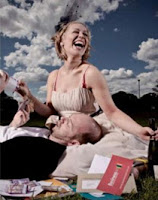 “Love will break your heart…”

Midsummer [a play with songs] is a 2008 show that started life at the Edinburgh Festival but has managed to translate that into genuine success with a successful London run at the Soho Theatre, taking it the USA and other productions opening worldwide. This original team returns to London for a residency in another theatre known for its lack of reserved seating, the Tricycle, ahead of going to Australia.

The tale of a crazy weekend in Edinburgh told from two perspectives: Bob, a petty criminal and Helena, a divorce lawyer, both 35 and thrown together in unlikely circumstances, it crystallises so many concerns of the 30-somethings who suddenly come to realise that middle age cannot be escaped and the person who they thought they were going to be is looking right back at them in the mirror. And in creating this lovely picture of two people connecting despite their differences, it portrays a beautifully realistic acceptance of the realities of finding a partner rather than the heady idealistic romanticised view so often seen elsewhere. END_OF_DOCUMENT_TOKEN_TO_BE_REPLACED

“It’s Midsummer, in Edinburgh, it’s raining, and there’s these two people having sex”

After being blown away by how good Legally Blonde was at the weekend, I was little expecting to see something that made me feel as good (and possibly even better) so soon, but Edinburgh transfer Midsummer (a play with songs) did just that last night, tucked away in Dean Street’s Soho Theatre. I’ve seen a couple of musicals already this year and I can overwork a metaphor along with the best of them, so here a dubious extension thereof: if Priscilla was a frothy marshmallow on top of a cup of the best Viennese hot chocolate which was Legally Blonde, then Midsummer was the long weekend in Vienna that made it all possible, it is spontaneous, joyous, energetic, uplifting: something truly special.

Written by David Greig, the play is set over a whirlwind weekend in Edinburgh: Helena (Cora Bissett) a divorce lawyer and Medium Bob (Matthew Pidgeon) a small-time crook have a chance meeting in a bar which leads to a one-night-stand. They part the next morning, but events

conspire to throw them back together and a crazy rollercoaster of a weekend ensues. The action is then enhanced throughout with a set of lo-fi songs by Gordon McIntyre which are performed by the pair onstage with guitars, Bissett in particular has a beautifully pleasing voice, putting me in mind of Tracey Thorn with a hint of Joni Mitchell. END_OF_DOCUMENT_TOKEN_TO_BE_REPLACED