COVID-19 hasn’t been a great time for many people but it has been particularly cruel on those who would have graduated during this time, robbing them of those rites of passage but also for theatre grads, the more valuable opportunity to showcase their talents. Graduates at Cadogan Hall is the brainchild of Ameena Hamid Productions and The Grad Fest, offering an online showcase for 40 2020 and 2021 graduates, who got to sing at Cadogan Hall with the brilliant Sam Young accompanying them, whilst also supporting the Acting for Others charity.

The programme is divided into three separate hour-long concerts and this first one has a whole raft of special guests, introduced as it is by Grace Mouat and sprinkled with gorgeous messages of support from those who know exactly what the struggles are, from the fabulous Anika Noni Rose, Alexia McIntosh, Gary Wilmot and Juliet Stevenson too. And since the concert is about celebrating all of these performers, I’ve opted to do things a little differently with this posts, giving everyone their moment to shine. So click on an image, read little mini reviews of their performances and get connected with them on socials to get their careers kickstarted in this different way. END_OF_DOCUMENT_TOKEN_TO_BE_REPLACED

“If you strip away the myth from the man…”

There’s no arguing that the musical theatre songbook is skewed in favour of men and with theatre’s enduring love of a revival, that means the opportunities for women to express the fullness of their selves onstage have always been limited (hell, even as I write this a man has been announced to play Mother Superier in the Edinburgh run of Sister Act…).

This is the world US performers Genevieve Flati and Kelly Rogers are trying to reshape just a little with their show (Wo)men Rule Broadway [West End Edition], making its international debut here at the VAULT Festival. More than just a gender-reversed concert, Flati and Rogers compere the evening with a running commentary of how and why these songs have been chosen, exploring and explaining the boundaries being broken here.  END_OF_DOCUMENT_TOKEN_TO_BE_REPLACED

A quick round-up of the rest of September’s shows

Mary Said What She Said, aka how far I will go for Isabelle Huppert
The Provoked Wife, aka how far I will go for Alexandra Gilbreath
A Doll’s House, aka if we must have more Ibsen, at least it is like this
Falsettos, aka finding the right way, for me, to respond
The Comedy Grotto, aka a sneaky peak at Joseph Morpurgo
The Life I Lead, aka something really rather sweet
Blues in the Night, aka all hail Broadway-bound Sharon D Clarke (and Debbie Kurup, and Clive Rowe too)
Everybody’s Talking About Jamie, aka well why not go again END_OF_DOCUMENT_TOKEN_TO_BE_REPLACED

This trio of album reviews covers Here for You: Ballads for Broadway Impact, My Lifelong Love and Infinite Joy: The Songs of William Finn

“People are swell but I’d rather be sailing”

Released in 2013 in support of Broadway Impact, an organisation of theatre artists and fans mobilised in support of marriage equality, Here for You: Ballads for Broadway Impact is a powerful collection of songs from Jonathan Reid Gealt. It is no secret that I love a ballad and having the likes of Kelli O’Hara, Adrienne Warren and Jeremy Jordan crooning and belting like this is just heaven. Jordan’s elegiac ‘Here For You’ with its gentle guitar is superb, as is the passion of Warren on ‘Home Away From Home’ but the standout track for me is O’Hara’s powerfully moving ‘Breathe’. END_OF_DOCUMENT_TOKEN_TO_BE_REPLACED

I was excited by the prospect of a new John Owen-Jones album but the reality of Bring Him Home – A Collection of Musical Favourites was, I have to say, a little disappointing. For it is something of a greatest hits affair, collecting together tracks from three of his previous albums – Unmasked, Rise and his self-titled album and adding in just the three new songs.

Those tracks are Miss Saigon’s ‘Why, God, Why?’, West Side Story’s ‘Maria’ and ‘Suddenly’, written by Claude-Michel Schönberg, Herbert Kretzmer and Alain Boublil especially for the filmed version of Les Misérables. Only the last of these has any real interest as something particularly new, although fans will enjoy the personal connection Owen-Jones has to the others (drama school audition song, and first show he was in onstage). END_OF_DOCUMENT_TOKEN_TO_BE_REPLACED

“Livin’ for the moment’s rewards”

I did like Nadim Naaman’s first album We All Want The Same but with its compositions stretching over a decade of Naaman’s songwriting, it didn’t quite have the cohesion to show off his emerging talents. For his second CD though, he’s gone all-out to demonstrate the depths of both sides to him as a musician – opting for a double-length album, half the songs are musical theatre numbers which have received his own spin, and the other half are original songs written over the last year. Thus Sides reaches with larger ambition, and succeeds.

Naaman has a marvelous showman quality to his voice but it’s beautiful to hear him bring out all the colours he can – the sense of building excitement in The Hunchback of Notre Dame’s ‘Out There’, the driving, the driving swagger of The Fix’s One, Two, Three complemented by its tenderly heartfelt break. A jaunty ‘Moving Too Fast’ sees him looking back to one of his first professional roles as The Last Five Years’ Jamie whereas his current gig – Raoul in The Phantom of the Opera – is acknowledged with a startling but hugely effective Latin-inflected treatment of its title song, accompanied by the glorious richness of Celinde Schoenmaker’s voice.

END_OF_DOCUMENT_TOKEN_TO_BE_REPLACED

The Orange Tree Theatre continues to ring the changes under Paul Miller’s reign with their Orange Tree Extras, a series of varied one night theatre, comedy, music and spoken word events. This week has already seen Barb Jungr sing Nina Simone and Tim Crouch reprise his I, Malvolio but it was the promise of cabaret from original Avenue Q cast members Simon Lipkin, Jon Robyns and Giles Terera that tempted me out to Richmond.

Avenue Q is a show that I loved with all of my heart when it arrived in the West End, making seven trips across the four years of its various cast and theatre changes. And though I have enjoyed the touring versions that have emerged since, there’s nothing quite like the original and so the news that Lipkin and Robyns would be bringing along Princeton, Nicky, Rod and Trekie Monster along with them was music to my ears, YAYYY as the Bad Idea Bears might have said! END_OF_DOCUMENT_TOKEN_TO_BE_REPLACED 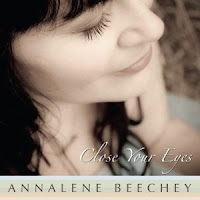 “What do you see, you people gazing at me, you see a doll on a music box”

Annalene Beechey is one of those performers whom I have seen a fair bit but never actually on the stage in a show, instead she has been a regular on the cabaret scene, supporting fellow ‘Christine’ Rebecca Caine or showcasing new musical theatre writing in theatres and on boats. So I thought I’d give her album Close Your Eyes a spin to see how it stacked up and it came up good!

What works so well for me is her song selection, she steers clear from too much rehashing of familiar standards and instead chooses to highlight the work of the composers with whom she has built up a connection whether personally or just through their music and it shows. From the newbies like Grant Olding – the gorgeous ‘Hannah’s Dream’ and Scott Alan – the fragile beauty of ‘Always/Goodnight’ to the more seasoned hands of Stephens Sondheim and Schwartz –an Into the Woods medley and ‘Lion Tamer’ from The Magic Show respectively, Beechey’s love of the genre shines through with insightful interpretations that dig deep into these songs and what they mean to her. END_OF_DOCUMENT_TOKEN_TO_BE_REPLACED

“And if that’s what you believe you need, you’re wrong…you don’t need much”

I was a little wary of John Owen-Jones’ album John Owen-Jones when it was first pressed into my hand to listen to by a friend. Despite having been impressed by John Owen-Jones in the 25th Anniversary tour of Les Miserables, I’m not generally a fan of bombastic male singers and having had my fingers burned/eardrums damaged by listening to Alfie Boe’s album, I have to admit to lumping Owen-Jones in with him. But my friend was persistent and admittedly, I was most intrigued by the prospect of him singing Sondheim’s ‘Pretty Lady’ from Pacific Overtures with Michael Ball and Bryn Terfel. So I listened to that song first (how I ever managed with cassettes as a child I do not know!) as I was pretty sure that it would set the tone of whether I liked the approach to the album or not. And sure enough, despite it being three massive male voices, there is a gorgeous subtlety at work here that convinced me that this was going to be something more than your standard pop-opera fare and closer to a ‘proper’ musical theatre album.

Over a nicely trim 11 tracks, Owen-Jones covers a number of bases but surprisingly for me, he ventured into contemporary musical theatre with great success. ‘I’d Rather Be Sailing’, by American William Finn, a composer who I only currently know through people singing his songs at cabarets but who I am pretty sure I think is fantastic, is a lovely piece of restrained singing, multi-tracked to gorgeous effect. Jason Robert Brown’s ‘Someone to Fall Back On’ is also excellent (though Julie Atherton does now own that song, even if it was written for a man to sing). END_OF_DOCUMENT_TOKEN_TO_BE_REPLACED

“You have to understand the way I am, mein herr”

Supported by a series of shows on both sides of the Atlantic, Alan Cumming’s I Bought A Blue Car Today documents his last 10 years of slowly becoming an American citizen whilst never really losing the impish Scottish charm for which he is so well known from appearances in film, tv and onstage. Under the musical direction of Lance Horne, he rips through a huge range of songwriters and styles whilst showing off a new facet to his ‘many talents and one which pleases for the most part.

He slips between the world of popular music and musical theatre with an impressive ease: a rousing rendition of Cyndi Lauper’s ‘Shine’ is matched by the stirring take on ‘Where I Want To Be’ from Chess; and who else could trace a journey from Dory Previn’s ‘Dance and Dance and Smile and Smile’ to a Mika song via Victoria Wood’s ‘Thinking of You’. But the highlight is probably a sleazily sensual riff on ‘Mein Herr’ from Cabaret that is downright filthy but huge amounts of fun. END_OF_DOCUMENT_TOKEN_TO_BE_REPLACED