It’s a bold move to put a character as flawed as Madeline front and centre in your debut play; still more to not give her the kind of redemption arc that conventional wisdom suggests we crave in our drama. So Frankie Meredith’s Turkey reveals itself as a nifty piece of writing, developed from a true family story in a Soho Young Writers Lab exercise in 2015 and now premiering at the ever-welcoming Hope Theatre.

At first it doesn’t seem that way. We meet Madeline in the afterglow of a passionate vodka-fuelled night with Toni, adamant she’s not a lesbian – she has a boyfriend she’s cheating on after all – but soon entwined in a full-blown relationship. Fast-forward to moving in together and squabbling over which organic vegetables to buy, the focus of the play soon emerges as Madeline’s unstoppable desire to have a baby becomes the dominant force in their lives.

In and of itself, it’s a fascinating story to tell from an LGBTQ+ perspective: who, if anyone, gets to have the biological link to the child and how to decide who the ‘third’ should be. Amid the pressures that this kind of immense decision-making puts on their relationship, Meredith also layers in an additional complication in the form of Michael, the father of Madeline’s dead ex-boyfriend who comes back on the scene after 12 years away.

There’s hints of Yerma in the way that the drive to have a child can prove so destructive but this is a defiantly 21st century world where society’s rules are not so strict, it’s individuals’ behaviour that is the thing. And Peyvand Sadeghian’s Madeline embodies this self-absorption well, unable or unwilling to comprehend how her actions impact those closest to her but not malicious with it, just all-too-ineffably human both at her loving best and her manipulative worst. 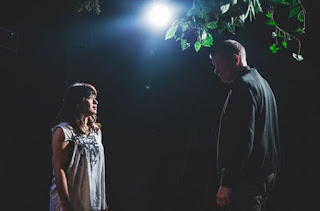 Director Niall Phillips has also cast well against her – Harriet Green’s compassionate Toni pushed increasingly to her limits, Cameron Robertson’s grief-stricken Michael dancing around on the moral high ground (where he’s ultimately just a little too comfortable). And if the design of four square boxes encourages an occasional staticness in some of the scenes, the squalling rock of the soundtrack infuses a keenly raw edge to Turkey’s energy.

With her declaration that we’re all fuck-ups and fundamentally dishonest to each other, and the simultaneous suggestion that this is just the way life is sometimes, Meredith announces herself as a writer with something to say. She has a great ear for a throwaway comic line and captures a zeitgeisty tone to her humour as she gently mocks the Wikipedia-stealing, wi-fi obsessed society we’ve become, and also tosses in an intelligently understated look at modern sexual attitudes and how no matter how progressive they are, they don’t excuse you from common decency when it comes to those you love.