In the wake of a global shift in politics that saw reality star Donald Trump become the 45th President of the United States of America, Nigel Farage’s Brexit campaign win the majority and the Conservative party seek out a deal with the DUP, Theatre Renegade is proud to present a one-off gala, In Response To… Politics.

>With performances from critically acclaimed performers including Pippa Nixon, Madalena Alberto, Gloria Onitiri and Nigel Richards, In Response To…Politics will take place on 24th July at The Other Palace Studio and feature a number of pieces each designed to directly respond to the current political turmoil.

“Many countries, our own included are seeing a huge shift in their political landscape and fear and hate have been the leading force behind several recent campaigns. This evening will see the theatre community come together in solidarity to respond and raise its voice in solidarity.”

All profits from the evening will be donated to the charity Liberty, to protect civil liberties and promote human rights.

Staying at The Other Palace, there’s also a special concert in memory of the late MP Jo Cox.

Money from the concert will got towards a school production of Hear The People Sing, which is

being produced by Donna Munday and Nick Evans in Cox’s former constituency of Batley and Spen.

Noel, who hasn’t performed on stage in Wales for almost two years, takes on the gritty role of Harbour Master, Séamus O’Rourke in Tiger Bay the Musical, a story of the notorious underworld of Wales’ capital at the turn of the 1900s.

Playing the ambitious opportunist, exiled from Africa to make his fortune through unsavoury means on Cardiff Docks, will be a change in direction for Noel, whose theatre repertoire includes a string of romantic leads, such as Danny Zuko in Grease and Galileo in We Will Rock You.

A Wales Millennium Centre production in association with Cape Town Opera, Tiger Bay the Musical is set in 1900s Cardiff at a time of unrest between the workers heaving coal in the docklands, known as Tiger Bay, and the Bute Dock Company and merchants of the Coal Exchange they afforded.

A fictional story of revolution, reconciliation, courage and love, the award-winning creative team – composer, Daf James, writer Michael Williams and director, Melly Still – have remained sympathetic to the reality of the era which includes forming a predominantly Welsh cast.

The world premiere of Tiger Bay the Musical will take place on Wednesday 15 November 2017 at Wales Millennium Centre and will run until Saturday 25 November 2017. Tickets on sale now at tigerbaythemusical.com 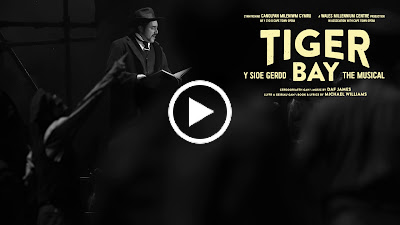 The finalists of The ONCOMMs 2021