“This is for a play in the West End?”

Agatha Christie’s And Then There Were None may not have seemed like the most obvious festive programming but Sarah Phelps’ three-part adaptation was an unalloyed success for the BBC. It was a particular surprise for me, as having seen it a couple of times on the stage, most recently in a rather creaky touring production, I wasn’t sure how it could be done well. But Phelps and director Craig Viveiros have managed a remarkable job, transforming the murder mystery into a dark, oppressive psychodrama.

From the off, swooping camera shots (of the Cornish locations standing in for the Devonian Soldier Island) take us out of the dusty drawing room, and haunting flashbacks take perfect advantage of the medium to suggest the oppressive weight of guilt that is being brought to bear here. For those new to the story, a microcosm of English society is invited to an isolated country house, under varying auspices, and once fully assembled, find themselves being picked off one by one by an unknown killer.

Who could it be? Douglas Booth’s cocaine-tooting playboy, Anna Maxwell Martin’s troubled servant, Toby Stephens’ blustering doctor, Miranda Richardson’s fantastically awful missionary. The joy of these television events is that they’re now cast to the hilt, gone are the days when you could work out whodunnit by finding the most famous member of the cast. And with such luxury at hand – I’ve not even mentioned Sam Neill or Charles Dance – the journey becomes just as enjoyable as the resolution. 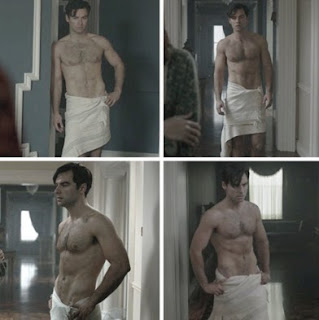 What I thought Phelps did most effectively was to show how Christie’s writing was hugely reflective of the times – something that is lost completely on the stage – asking hard questions of the upper echelons of English society in the strangeness of the interwar period. And consequently the character studies that emerged were deeply intriguing – Maeve Dermody’s Vera Claythorne and Aidan Turner’s Philip Lombard standing out with their smouldering sexual chemistry (and one has to appreciate the BBC in-joke of contriving to have Turner shirtless again – Merry Christmas indeed).

The flashback scenes also allowed for a few niche(ish) theatrical spots – Paul Chahidi chewing the scenery as a Soho office functionary, Rob Heaps as an adorably posh man and Ben Deery as a soldier, plus Catherine Bailey continuing to fool me as a Rachael Stirling impersonator! Altogether, very highly recommended.