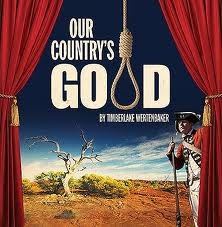 The play is set in a newly colonised Australia in 1788, where a ship full of transported convicts accompanied by a troupe of soldiers are forced together in this foreign land to forge a new society. Based on a true story, it tells of a benevolent governor who looked beyond the contemporary standpoint on crime and punishment to a more modern view of rehabilitation and used the power of theatre to try and offer an alternative to the unruly mob, much to the displeasure of his officers.

There’s no denying the awkward space of the Rose Kingston, a stage that is set far too far back which instantly distances an audience. And in some ways, director Alastair Whatley’s approach doesn’t always help. There’s a measured stateliness to proceedings that makes the first half in particular quite flat and dry, and even though the curtain-heavy set would seem ideal for rapid scene changes, there’s little sense of pace which sadly meant my attention wasn’t always grabbed as fully as it might have been. Combined with a lack of atmosphere, the venue working against them here but also the dearth of an effective soundscape deployed throughout that might have assisted – what singing there is works extremely well.

That’s not to say that there isn’t anything to enjoy here, not at all. The ensemble of 10 revel in the opportunity to double up: Aden Gillett makes a compassionate Governor and a bookish Wisehammer, desperate to preserve the integrity of the text; Adam Best’s vicious Major Ross contrasts well with his kindly Ketch, and Philip Whitchurch provides a trio of well-defined characters. Chris Harper does an excellent job as the Second Lieutenant who steps up to be the director of the play and gently introduces his cast to the concept of acting, of dealing with their issues in another way and defending their rights against the hostility from his fellow brother officers.

Wertenbaker really impresses though with her female characters, pointing up the cruel disparities in the treatment of female prisoners at the time, and the greater emotional release that acting provided for them. Emma Gregory’s Liz Morden embodies this best with a beautiful performance, with Emily Bowker’s tender Mary and Rachel Donovan’s bawdy Dabby also impressing.

Much of my reservation about the show came from its staging in the Rose. With a variety of venues upcoming though, I very much imagine that a greater sense of immediacy and connection will be able to be fostered, creating a more fulfilling audience experience. I’d still wager that an upping of the tempo wouldn’t go amiss as well and as the tour progresses, I wouldn’t be surprised to see a greater fluency emerging.