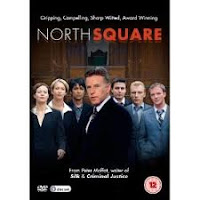 Written by Peter Moffat, North Square is a drama set in a criminal chambers in Leeds and centres on a group of young, irreverent barristers all determined to make their mark by using unorthodox methods and unconventional approaches to counter the dusty practices of a legal profession they want to lead into the twenty-first century. They are led by their chief clerk, the highly manipulative Peter McLeish played brilliantly by Phil Davis, who is determined to make a success of this enterprise and has no scruples about negotiating with the criminal families that rule Leeds in order to maximise business opportunities even as it poses a moral quandary for some of the lawyers.

It is this that provides the most dramatic tension in the series as the main long-running storyline that accompanies the self-contained cases that make up the episodes. And pleasingly it is Helen McCrory’s character, the fiercely intelligent and ambitious Rose Fitzgerald, that clashes most with McLeish as she is the one with the biggest problem with the ethics of representing criminals and being so damn good at her job, she’s the one most often at the forefront. Their battles are the best scenes in the show as her quiet fury at being manipulated into situations she is not comfortable in leads her to drastic action against her chief clerk who ends up needing her more than he could ever imagine.

At the beginning of the series, McCrory’s Rose is heavily pregnant and the show also touches on the challenges faced by working mothers but in an interesting way. Rose works right up until giving birth and is back just four days later and though her partner Billy – Kevin McKidd – is a barrister in the same chambers, there is no question of her giving up work as it is widely acknowledged that she is the best lawyer in house. Her relationship with her pupil, the gangly gauche Morag, is also well done as the younger woman tries to learn as much as she can from her mentor and Rose fights her corner against a smooth rival.

But the rest of the show is fun to watch as well as the personal lives of the barristers intertwine with their professional lives as case follows case. Kim Vithana’s struggle to make sure she is being successful on her own terms rather than as a token Asian woman, not helped by her affair with a judge; the travails of Rupert Penry-Jones’ Alex who is more than happy to sleep around in order to secure work and judgements in his favour, even if his girlfriend doesn’t agree – Victoria Smurfit’s Helen an under-developed character to be honest, but she connect well with Dominic Rowan’s nerdishness.

I loved watching North Square again and reminding myself of how much I enjoy watching Helen McCrory’s performances. It is well worth the watch, easily accessible via 4OD and YouTube, and not just because they manage to get Rupert Penry-Jones down to his boxers within the first five minutes of the first episode!