“Be the flame, not the moth”

Taking in Lasse Hallström’s 2005 film version of Casanova was quite an odd experience in the end, a rather overwhelming sadness at Heath Ledger’s passing struck me from the off, in a manner that hadn’t hit me before, even whilst watching his final performances in The Dark Knight and The Imaginarium of Doctor Parnassus much closer to his untimely death in 2008. But I was resolved to watch as many films with Helen McCrory in as possible and so I continued with it.

She plays Casanova’s mother and so her appearance was limited to an opening sequence which set the scene for the film, her leaving him with his grandmother as a young boy and then disappearing from his life. [SPOILER ALERT] She then reappears in the finale in the nick of time to save Casanova’s bacon and is involved in the swashbuckling, sword-brandishing showdown as all those trying to catch up with the lusty lothario chase him through the streets of Venice. It’s a small role, and one that sadly allows little opportunity for McCrory to really make her mark, one would be hard-pressed to really remember her in this particular film, but sometimes that is just the way it goes. 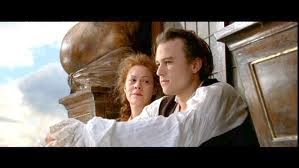 I did however find myself liking the rest of the film quite a lot. It is rather silly, and never takes itself too seriously, Ledger excelling as the charismatic Casanova who is taken by the striking, and strikingly intelligent, Franscesca and resolves to have her, using subterfuge, disguise and many a ruse to find a way to wheedle into her affections as his reputation as a playboy precedes him. Sienna Miller does well as the sparky Francesca, resolutely determined to make her own way in this man’s world, using a male nom-de-plume to get published, and pleasingly forthright in her opinions.

There was a fair bit of thesp recognition in here too: Tim McInnerny as a ridiculously attired Doge was very…McInnerny-like (Ken Stott and Omid Djalili also played their parts as they play many others…), Natalie Dormer as a reluctant virgin was good fun and Charlie Cox as her moonstruck admirer who soon grows in confidence and experience reminded me that he is a good actor who I’d like to see onstage again. Jeremy Irons as Papal representative Pucci, determined to eradicate all traces of fornication, sent himself up quite well and I also really enjoyed Lena Olin as Francesca’s flirtatious mother – I should go and see if she’s ever done any stage work as I’d really like to see her onstage.

So perhaps not the best McCrory experience but an enjoyable watch nonetheless.

The Complete Walk, from the comfort of your sofa #9