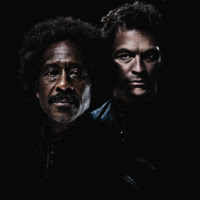 “Men should be what they seem; Or those that be not, would they might seem none!”

Forming part of the 40th anniversary season at Sheffield’s Crucible Theatre is a production of Othello which continues their ability to attract top-notch televisual talent: last year saw John Simm taking on Hamlet and here we find both Dominic West and Clarke Peters. But for all the draw of these stars of The Wire, the reason that I actually booked in the end was the casting of Alexandra Gilbreath, one of the few actresses for whom I would travel just about anywhere to see, indeed I’ve not actually got round to watching any of The Wire yet (I was all about Battlestar Galactica y’see).

It is actually the first time I had seen this play on stage, it wasn’t one I ever studied and held little interest for me since then if I’m honest, but I thought I would give this one a try and the decision paid dividends for this was a truly superb production. Directed by Daniel Evans, it is a traditional rendition but far from old-fashioned as this tale of deep betrayal pulses with life and energetic drama on the wide open stage of the Crucible.

West’s Iago is a brusque, plain-speaking figure, brutally up front about his proclivities and prejudices, a decision helped no end by his Yorkshire accent which also perversely makes him a more magnetic personality. This is the guy in the pub who you know you shouldn’t listen to but can’t help yourself but be won over by, his bearded visage appealing until finally unmasked as a bitter misogynist and West’s verse-speaking is superbly natural even in its brogue from t’wrong side of t’Pennines. Peters’ Othello has a slightly less successful time aurally, opting for a West Indian accent that doesn’t always lend itself to the greatest clarity though his acting is never less than scintillating, the way he grows increasingly colder towards Desdemona is a masterclass in subtlety.

Alexandra Gilbreath’s Emilia, the put-upon wife of Iago, was everything I dreamed it could be and then some: a slamdunk fosterIAN nomination for the end of the year if ever there was one. A beautifully rounded characterisation that makes one understand so much more about her: the loneliness she feels as a soldier’s wife, the shame she feels for not being able to bear him a child, the flirtatiousness of a passionate woman and the profound guilt she comes to feel as her husband’s machinations become increasingly clear to her. She bonds well with Lily James’ first-rate Desdemona, another strong performance especially in a beautifully sung Willow.

But this is a production that is truly strong across the board: Gwilym Lee’s Cassio swaggers with a lascivious twinkle in his eye that suggests Othello might not be imagining everything, Brodie Ross’ Roderigo makes for an endearing fall-guy and who can blame him for going for so many hugs from Iago! Evans is unafraid to full embrace the physicality of the play as well, so there’s many a tussle, flashes of swordplay and the abiding sense that violence is never far away. And when it finally explodes in Desdemona’s death, we are spared none of the brutality of that shocking moment – a brief moment of staging beauty is quickly flipped to horrific effect.

Morgan Large’s set is highly effective, the huge stone wall at the rear and the Moorish-inspired mosaic of the floor subtly shifting in emphasis as we move from Venice to Cyprus and further events transpire; Alex Baranowski’s music is highly dramatic and suits the swift scene changes perfectly, ensuring the pace never flags and likewise Lucy Carter’s lighting is appropriately atmospheric. Occasionally I do wonder if the trips out of London are worth it, the travel eating up so much time, but for productions like this, I can say that it really is worth the effort: highly recommended.

News: All About Eve tickets now on general sale

Countdown to new Who: Doctor Who Series 4