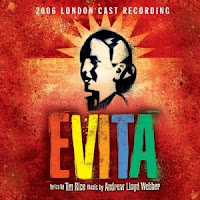 The soundtrack, edited highlights rather than the full score, captures much of what made that production so vibrant so that it doesn’t really matter that we don’t have any of the striking visuals and choreography that accompanied this Latin American infused remounting. The orchestrations have been totally refreshed in line with this re-envisioning and with Roger’s singing leading the company, there’s just a greater sense of authenticity about the whole shebang.

Roger is just perfect as Eva Perón, her voice bright and full of alluring character in energetic renditions of ‘Buenos Aires’ and ‘Rainbow High’, perfectly coquettish in ‘I’d Be Surprisingly Good For You’ and simply heartbreaking in the delicate ‘You Must Love Me’, the song written for Madonna’s film which has now been absorbed into the stage version. The natural quality to her voice packs in so much emotion into the old warhouse that is ‘Don’t Cry For Me Argentina’ which rescues it from cabaret and brings real meaning to the lyrics.

Around her, Matt Rawle makes for a charismatic Che, Lorna Want’s mistress delivers an exquisite Another Suitcase in Another Hall and Philip Quast is fine as Perón although it is not too much of a featured singing role and so something of his characterisation is lost on disc. But overall, I rate this as a smashing soundtrack to listen to of a fantastic production that deserved a much longer run in the West End.

If you can only download one song, make it…’You Must Love Me’

Review: Hadestown, via smart caption glasses at the National Theatre