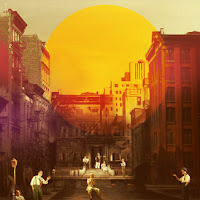 Winning the Evening Standard Award for Best Musical even with a short five-show run in 2008, Street Scene now returns to the Young Vic for a slightly longer run on The Cut, the final preview of which I caught, and followed by a tour. This 1947 show occupies a strange ground between musical and opera as composer Kurt Weill incorporates musical influences from all over the place: Broadway show tunes, operatic arias, folk ditties, jazz, blues and a whole lot more besides. And so to do it justice, director John Fulljames has assembled a company of 80 singers, the main cast complemented by a community chorus from the local area.

The book by Elmer Rice, adapted from his own play, is set over a couple of scorchingly hot days in a New York tenement building, occupied by a wide mix of ethnic groupings all dealing with their own crises and looking for a way out to a better life. The slice of life approach means that the eclectic score makes more sense, ricocheting around the diverse inhabitants and the multitude of stories that are touched upon before the action coalesces around the Maurrant family and their particular travails.

The strongest of these is the story of Mrs Maurrant, played with a gorgeous openness by Elena Ferrari, a woman longing to be loved the way she loves and determined to get it. That she finds this comfort in an affair with a travelling salesman rather than with her hard-drinking husband, a menacingly gritty turn from Geoffrey Dolton has the tongues of the neighbouring housewives wagging and the kids on the blocks teasing her young son Willie, but under the broiling sun, things get much darker (it is an opera after all…) At the same time, her teenage daughter Rose is also dealing with matters of the heart, batting away the advances of a lecherous boss tempting her with a Broadway career and negotiating the more fragile charms of the bookish but sweet Sam, the Jewish boy from next door: Susanna Hurrell and Paul Curievici both sounding excellent here but not quite pulling me under with emotion.

And indeed, I never quite lost myself in the drama of the storytelling of the whole thing. For me this was partly due to the way in which the elements of the show didn’t always blend: at one point a character even says “you can’t mix oil and water”. The kaleidoscope of the first half went on for too long before focusing on the central characters and there’s just not enough lyrical clarity at several key points – it always sounds gorgeous but the focus feels more on the singing than the acting. But then when things are calmer, one is hit by the banality of lyrics like “Rose, you are wearing a black dress” at what should be a moment of high drama and searing emotion: the balance between operatic intensity and the greater flexibility of musical theatre never quite settling for me and allowing me to fully engage with the plight of these characters. Parts of the ending troubled me too as we pulled back a little from the Maurrants’ plight, I couldn’t quite see the point being made around the eviction of one of the families and the lack of community spirit thus shown and what about poor Willie?!

That said, there are some fabulous moments in here: predictably I loved the Broadway numbers and John Moabi and Kate Nelson sparking off each other in a great dance number; Charlotte Page’s sharp-tongued Mrs Jones (and her invisible dog…) softened by her counterpart across the way played by Simone Sauphanor, and Elena Ferrari’s warm portrayal of her matriarch is just excellent. And there are sections of musical beauty as the combined sound of cast and choir meld to scintillating hair-on-end effect. I don’t know about the logistics of these things but it seems odd that the orchestra will change after the press night. We heard the BBC Concert Orchestra, conducted by Keith Lockhart, in fine form in their penultimate performance, but the rest of the run will be covered by Tim Murray and the Southbank Sinfonia. Whoever you see, you’ll be impressed by the way they are integrated into Dick Bird’s set and the overall effect of Street Scene is one of great accomplishment: the weaknesses, as I saw them, are in the overlong piece itself.

Running time: 2 hours 45 minutes (with interval)
Programme cost: £2.50, and in a newspaper style too
Booking until 1st October then touring to Vienna, Basingstoke, Edinburgh, Newport and Hull