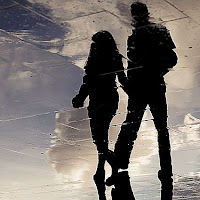 Bringing the Orange Tree Theatre’s Spring season to a close in their annual Director’s Showcase, a double bill directed by two young hopefuls from their Trainee Director scheme and an opportunity for aspiring directors to get that valuable first step on the ladder. This they do with the two shows Then The Snow Came and Winter, both utilising some of the cast from the recently finished show Three Farces.

Then The Snow Came, both written and directed by Jimmy Grimes, is a devised piece incorporating verbatim dialogue, improvised sequences, a brief foray into puppetry and a recurring motif of Oscar Wilde’s The Happy Prince into this tale of two homeless men on the less salubrious side of the streets of Richmond. The collaborative nature of the whole show is evident in the grim richness of the sense of authenticity that emanates from all aspects thereof.

As the two men, Kieron Jecchinis and Daniel Cheyne are both impressive: Jecchinis’ brash Mickey tempered by the more philosophical Stu as the amble around Richmond, shooting the breeze on all kinds of subjects and the breaking the heart as family issues for one of them threaten their fragile friendship. Ed Bennett amusingly pops up as a number of supporting characters and the overall sense is of a compassionate, bruisingly powerful drama.

My only reservation came with, predictably, the puppetry. Not so much because I’m not a fan of it but more the fact that it was so brief and utilised so little. I know that the evening is called a Showcase but this did feel a little bit like ‘look what I can do’ rather than being particularly well-integrated into the show. But a thrilling piece of new writing that one could well believe will have future life.

Fosse seems to polarise opinions like nothing else and on previous form there is no reason why anyone, least of all myself, would expect this to be a playwright that engages me. But there’s something in the elliptical minimalism that appealed to me, the challenge to the audience member to leap from realism into something much more ephemeral and making their own connections to the material, that made the Young Vic’s I Am The Wind a surprising success for me.

Translated here by Ann Henning Jocelyn, Fosse’s 2000 play Winter opens with a harried businessman encountering a young woman in the middle of some kind of traumatic episode – drugs, prostitution, nothing is clear but he shows her sympathy and invites her back to his hotel room. Their relationship then takes an unexpected turn as he decides to leave his family and job for her and as we progress, not everything is necessarily how it seemed.

Perhaps it is the knowledge that it is European writing and therefore ‘different’, or perhaps a touch of would-be pretentiousness on my part, but for whatever reason, there’s something in here that connects with me. And though the text is often dense and repetitive, Jennifer Higham and Stuart Fox’s persuasive performances suggest the depth of the metaphorical imaginings behind Fosse’s work, he’s not so interested in just representing life on the stage but exploring motivations and connections in a more figurative way.

It is interesting that once again it takes a European director to bring Fosse to a London stage, but Teunkie van der Sluijs deploys a controlled, spare touch that is unafraid of the bleakness that is clearly something of an acquired taste that many here are resisting. I, for one, was grateful for another chance to explore this fascinating playwright and support the nurturing instincts of the Orange Tree which suggest bright futures for both Grimes and van der Sluijs.