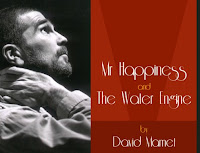 The first, short, piece is a one-man-show, David Burt starring as a radio show host playing at agony uncle, reading out letters and dispensing frank advice to his listeners’ personal problems. Silhouettes on the bookshelves behind him enact some of the scenes which adds an extra layer which isn’t strictly necessary as Burt’s sonorous voice and expressive face are more than plenty to guide us through the tangled concerns with a soft but matter-of-fact humour.

As we slide straight into the second play with the help of a beautifully harmonised rendition of the Illinois State song and the whisking away of the shelves to reveal the full depth of the stage, it is clear that The Water Engine is going to be something different. Inventor Charles Lang, played with great earnest by Jamie Treacher, has created an engine which runs on water for fuel. Aware of the need to secure the patent for his invention and dreaming of a better life for himself and his sister, he underestimates just how devious big business and their lawyers can be.

The full ensemble is involved here, not just in playing the many small parts around this main narrative, but also in the creation of the full 1930s bustling soundscape of the show. Musical interludes abound, with sax, banjo, trombone, piano all being utilised and sound effects and amplified voices coming from all around, slamming drawers and rattling phones being the most visible and making explicit the connection here between radio and theatre. The sax playing did get a little Lisa Simpson for me, getting a little bit repetitive for my liking and when the music was underscoring vocal performances, the balance was not always 100% in the echoey chamber, though largely atmospheric.

Burt shone again as one of the devious lawyers, barely concealing the malevolence behind his smile, Timothy Knightley’s journalist and Lee Drage’s appealingly innocent Bernie also impressing, all dealing with ease with Mamet’s customary stylised dialogue. The way in which the connections are drawn between the two pieces, which slowly come into view, is neatly done, this isn’t Mamet’s most sophisticated work to be sure, but there’s a simplicity to the emotion behind the writing that really works.

Running time: 1 hour 45 minutes (with interval)
Programme cost: £2.50 (and well worth it for the tons of content within: it puts many a West End programme to shame)
Booking until 9th July