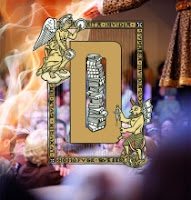 A strange mixture of dark tragedy and broad comedy, the play looks at the danger of recklessly pursuing the quest for knowledge, power and wealth without due responsibility. Faustus, tired of his life of dusty scholarship, makes a pact with the Devil exchanging his soul after death for 24 years of service from his trusty servant Mephistopheles. Blinded by the material benefits that easy access to the dark arts garners him, the reality of eternal damnation doesn’t hit until far too late.

Played in Renaissance dress and using Renaissance staging as befits the venue, there’s an undoubted charm to the way in which spectacle is introduced to take us into the dark fantasy world conjured up by these devilish men: angels and devils battle in Faustus’ conscience; the Seven Deadly Sins are brought to vivid life; giant puppets rise into the air and flames bursting in mid-air to enchant the audience.

But there was something seriously lacking here that meant that it did not cast its spell over me. Part of it comes down to the play I think with its uneasy combination of such a dark central story and the bawdy sub-plots which are almost farcical as less experienced hands try to cast spells with comic results. The lack of darkness to much of the proceedings, compounded by the lack actual darkening sky on this early evening Sunday performance, meant that I didn’t really feel the tragic arc at all.

It doesn’t help that there is little to contextualise Faustus as a person before he makes his deal and so Paul Hilton has little to work with to suggest any real depth to his leading man that makes him more than an arrogant showman. Likewise, Arthur Darvill’s Mephistopheles felt rather anaemic too, too often left standing to the side and rarely suggesting his demonic origins. Perhaps I was expecting something more akin to the other Mephisto-figures I’ve seen – all from Goethe though – but I just wanted darker.

Pearce Quigley’s clowning was well-received though it really isn’t my kind of thing especially with the musical accompaniment and the vulgar comedy elsewhere also left me alienated. Felix Scott did well in his chorus role and as Faustus’ assistant and the company was generally strong, though I would have liked to have seen much more of Jade Williams. The stage magic is fun, though only one trick is truly great and overall I just wanted more darkness and despair, something that was perhaps never likely on one of the hottest days of the year.

Review: The Merry Wives of Windsor, RSC at the Barbican

Review: The Lioness, Women, Power and Politics at the Tricycle