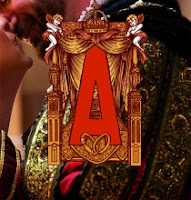 All’s Well That Ends Well occupies an enigmatic place in the Shakespearean canon, grouped as one of the ‘problem plays’ since it does not fit neatly into one category or another – an enigmatically dark comedy full of ambiguity and curious ethics which means it is not one of the more regularly performed plays, indeed this is the first production to grace the stage of the Globe.

Helena is in love with the arrogant Bertram, son of her guardian the Countess of Rousillon, despite him being well out of her league as she is but a commoner. But when she utilises the skills left to her by her deceased physician father to cure to the King of France of a painful fistula and he gratefully offers a reward of her choosing, she seizes the opportunity to have the king allow her to marry the man of her choosing. Bertram does not take too kindly to being coerced thus and reluctantly submits to the betrothal but declares he will never be a true husband until two seemingly impossible conditions are met and leaves France for Italy to become a soldier, hoping to never see Helena again but she is one determined young lady.

Given the contrivances of the Bard’s plot which do not really bear much examination, a choice has to be made about the interpretation of the play to try and surmount the difficulties contained therein. Marianne Elliott coined the phrase Shakespeare noir for her dark Brothers Grimm-inspired fairytale take at the National which vastly played up the ambiguity of characters’ motivations and her final image of the (not-so) happy ending was just inspired. But there’s a much lighter tone employed here by director John Dove, and not just because of the glorious sunshine on this Sunday matinee preview, which brings a sparkling vitality to this play and removes any suggestion of a ‘problem’.

Sam Crane’s Bertram is superb and it is he who anchors this production, presenting his nobleman as much more of an immature, inexperienced-in-matters-of-the-heart young man (his sad loss of beard helping very much in this respect) than a cruelly insensitive cad. Overtaken by events and trapped into marriage, he loses his way for sure, but we see him clutching a love token from Helena several times throughout the play, indicating she is never far from his thoughts and so his final volte-face is much less of a surprise and actually a natural progression of the growth of his maturity. It is a wonderfully played performance, Crane’s verse-speaking remains a thing of pure pleasure and he is such an easy actor to watch, his reaction shots in particular are brilliant (keep an eye on him as Helena makes her way to choosing a husband).

As the other half of this uneasy love-match, Ellie Piercy makes a grand job of Helena, infusing her with a tenderness alongside the all-consuming passion which drives the single-minded pursuit of Bertram, a sensitivity that makes her extremely likeable. She is helped too by the omission of the seduction scene where she inveigles her way under the sheets with him (it is merely described here) and the development of an excellent relationship with the marvellous Janie Dee’s compassionate Countess, whose feelings for her daughter-in-law help further temper her actions.

The rest of the company is almost entirely made up of returnees from the 2010 season, John Dove obviously inspires loyalty from his cast (at least 10 of them were in his Anne Boleyn) and the ensemble feel is just great fun: I love the familiarity of the faces on the stage and the chemistry between them all is palpably evident and still effective, even at this early point in the season. Sam Cox’s imperious King was a delight; Sophie Duval’s cheeky Widow huge fun; James Garnon’s weaselly Parolles a flamboyant yet moving disaster-zone; Ben Deery’s manfully bearded opening French lesson and later interpretative skills excellently pleasing; the list really does go on as there was nary a weak link to be found.

Michael Taylor’s design is very simple: huge tree-covered panels at the rear of the stage which flip over to represent night-time or change of location and a long thin thrusting walkway into the middle of the yard helps keeps an energy to the movement onstage in what is already a nicely pacy production and bringing the action right into the audience, something the Globe does so very very well. Sumptuous costumes from Hilary Lewis; subtle but effective music led by Jon Banks; forget Hamlet, this is the Globe launching its 2011 season at the top of its game right here.