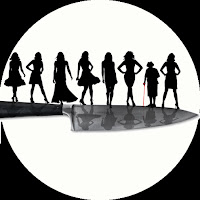 “Mummy, people tend not to commit suicide by sticking a knife in their back”

8 Women might perhaps be better known in this country for its François Ozon film musical incarnation featuring a frankly incredible cast of French film actresses, but it started life as a comedy murder-mystery play by Robert Thomas written in 1958 and reworked in 1961. Donald Sturrock’s translation here at the Southwark Playhouse is largely faithful to the original text although Anglicising some of the more Gallic references, but moves the location to somewhere in the Home Counties and the time to 1980 from 1960. Oh, and unlike the other Catherine Deneuve musical film adaptation currently playing in town, there’s no songs!

A businessman has been found murdered in his country house bed at Christmas-time and as there’s a major snowstorm outside leaving them housebound, the suspects are the 8 women in the household: his wife, 2 daughters, sister-in-law, mother-in-law, cook, chambermaid and his own sister. But someone is cutting the phone lines, puncturing the tyres of the car and generally sabotaging any efforts to get away so the women have to try to work out which one of them did it whilst each holding onto their own dark secrets and none of them are being totally honest.

It is all rather good fun in a tongue-in-cheek, almost farcical way: the dark comedy is broadly played by most if not all of the women as it emerges that each had a motive as their secrets come to light and relationships are reassessed after revelation follows revelation. The eye of suspicion constantly shifts as jealousies, loyalties, resentments, desires and frustrations emerge Sasha Waddell’s Regan steals the show with her nervy pill-popping drama queen, panicking at every noise and disclosure, but Alice Anthony’s slutty Welsh maid and Bernice Stegers’ no-nonsense Goneril were also eminently watchable. For it to really work though, the ensemble needs to be tighter to make the comedy really fly and the dramatic twists to work: there were too many pauses born of uncertainty but these should be ironed out as the run progresses.

Anna Bliss Scully’s set design is a little problematic though, going for the same configuration as The Rivals (running the length of the theatre except inverted) which creates a long thin strips of seating and indeed stage. This is fine in itself but there’s also a landing, a mini-stage with three doors placed awkwardly at the back of the seating area in the middle which is used quite frequently in Elgiva Field’s direction, not for huge amounts of time admittedly but requiring everyone to twist in their seats to see what is happening up there and to be frank, it gets annoying and uncomfortable. More crucially though, it hampers the clarity of the storytelling at a final vital point (I had to explain what happened to the lady next to me) as it is not immediately clear unless you’ve seen it.

Having seen (and loved) Ozon’s film version many times, it was a little hard to separate the two and not compare them, especially as they are pretty faithful to one another, musical numbers and one Sapphic encounter notwithstanding, but there is fun to be had here. True, the energy sags a little in the second half and it is not the most sophisticated of comedies, though naming sisters Goneril and Regan is genius and there’s more than enough silly humour in here with some nicely farcical performances that keep the laughter coming as the thriller element plays out, keeping one guessing right until the final revelation.

Running time: 2 hours 10 minutes (with interval)
Programme cost: £1
Booking until 9th April
Note: get in a bit early and sit as close to the middle as you can