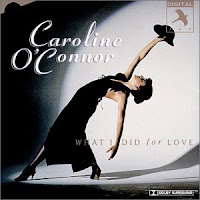 ‘What I Did For Love’ with its late-appearing choir is also good, but the fast-paced runs through songs like ‘I’ve Got The Sun In The Morning’ and ‘Whatever Lola Wants’ stretched my patience a little: there’s a slight relentlessness to proceedings which makes one long for a little more variation, but ultimately I suppose this would work against the showgirl aesthetic being pushed here.

O’Connor’s irrepressible spirit is huge fun to listen to, but for me it works better in small doses and with her tendency towards the brassier showtunes here, this is less a CD to listen to from beginning to end and one where my favourite moments will be whacked into a high energy playlist.

Album Reviews: Jonathan Reid Gealt – Whatever I Want It To Be / This Ordinary Thursday / Among Friends – The Words and Music of Richard Kates