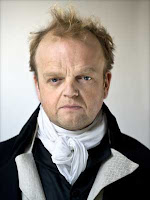 The Painter covers the middle period of his career and centres around the key relationships with women in his life, his mother who is slowly succumbing to dementia, his fertile lover and the prostitute who becomes his model and confidante. This is contrasted with his steadily growing professional success as a painter despite difficult relationships with his contemporaries and as an intellectual who frequently lectured students at the Royal Academy on his views on art despite being of ‘lower’ birth. But to be honest, there’s no real insight offered here beyond that of the superficial biographical.

What Lenkiewicz has done is to pull together a series of snapshots of the various aspects of his life, resulting in more than 20 short scenes which play out in Ben Stones’ successfully realised set which utilises (what one assumes are) the natural distressed features of this new space well to create an artist’s studio. The domestic mini-dramas are intermittently engaging in the effective space but with so little time to develop, their impact is often minimal, most notably with the over-played couple of short scenes with his mother. And the production was much less successful at portraying the shift to the speech-giving scenes, the immersive nature of the space around us feeling like an extension of Turner’s studio actually playing against this as the lighting change alone did not do enough to convince effectively of the change in environment: perhaps this was me longing for the old Studio 1 but this does not feel like anywhere near as adaptable and flexible a space.

That is the show, but I cannot finish the review without making some comment on the experience we had at the new Arcola which really did affect our experience. In some respects, part of me wants to ascribe most of this to teething problems in a new venue, but as paying customers I think we could have expected more, especially given the high standards one came to expect in Arcola Street.

We were left waiting and treated brusquely by the box office staff as it took three of them to deal with a problem despite being v close to curtain up time and the seats we ended up in were quite frankly terrible. Mine had a particularly restricted view due to the amount of safety rail in front of me and the couple to the right of us had a large pillar blocking a fair amount (at £10 I almost forgave this, but if you’ve paid £17 it would be an outrage to be expected to sit on this back row). Had we been in the lower banks, the action would have been excitingly close to us but given the airy height of this new Studio 1, too much of the dialogue was swallowed up for me to hear it properly (a problem exacerbated by a curious tendency to often direct the show to the left hand side of the auditorium) these new acoustics could take some getting used to, if not for everyone then definitely for me.

So a disappointing experience all round for me. For those who manage to get a decent seat, there is definitely the possibility that you will have a completely different evening to mine and discover something more to this play than was evident to me. I have long been a supporter of the Arcola and the ground-breaking work they have done in both community development and pioneering environmental sustainability techniques, and they have to be admired for being one of the few theatres to actually increase their ticket offers rather than their ticket prices at the turn of the year (£10 tickets are now available for the first 10 shows in the run for the main house, rather than just the previews). But in terms of the new theatre and whilst I am aware that I could possibly be cutting the Arcola some slack in what has been a time of huge change for them, it is hard to justify charging people for something which potentially is not 100% ready and tested sufficiently for all its audience members.

Running time: 2 hours (with interval)
Photo: Simon Annand
Playtext cost: £3.50
Booking until 12th February
Note: wrap up warm, it gets chilly in there. And avoid the right hand side (as you’re looking at the stage) especially the back row, if you can.