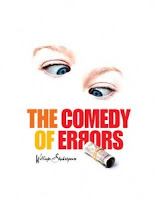 “Men, all divine, the masters of all these”

It is not often that I start off reviews with a negative comment but it must be said that Ed Hall and his Propeller company are naughty, naughty boys. When they announced their tour of their new productions, London was not among the cities and towns being visited so schedules were looked at, train timetables checked and we duly booked trips to Guildford to see Richard III and to Sheffield to see The Comedy of Errors. They then of course announced a short stop at the Hampstead Theatre which would have cut down on my travelling time somewhat. But, they don’t play there until the end of June and having seen both these shows now, I don’t think I could have coped with the anticipation waiting that long as they are sensationally good.

Ephesus has been re-imagined as a Costa del Sol type resort in Michael Pavelka’s design, full of football-shirt wearing blokes, geezers selling fake watches and flirtatious policemen and the air is filled with music, played live by the company who frequently break out into song, mostly snippets of cheesy 80s tunes which are brilliantly done and never outstay their welcome. Most of the ensemble remain onstage throughout, slipping out of their main role and into this group to provide a raft of sound effects straight out of a cartoon which are ridiculously funny and creating amusing moments in group scenes.

I would love nothing more than to tell you every single thing that made me laugh in this production but a) there isn’t enough room and b) there will be so much pleasure for you in seeing it for yourselves, because you are going to book for this. And Richard III. I demand it! I will drop a few hints of things to look out for though: sparklers, the can of mace, wheelie bins, the door alarm, the karate kicks, also be warned, you will never be able to hear the words ‘chilli sauce’ with a straight face again.

And performance-wise this is just an embarrassment of riches, the work that has gone into defining and developing even the minor characters is just a joy to behold and just ups the laugh count immeasurably. Wayne Cater’s Welsh Balthasar, Kelsey Brookfield’s bunny-girl courtesan, Chris Myles’ whip-brandishing Lady Abbess are all brilliantly observed as is Dominic TIghe’s lovesick officer, but Tony Bells’ Pinch steals the show with an inspired sequence that left me helpless with laughter, even in the pub afterwards.

I have been an ardent fan of Sam Swainsbury since he arrived in my lap early last year and as Antipholus of Ephesus, he repaid my faith in him with an energetic and highly amusing performance along with Dugald Bruce-Lockhart’s Antipholus of Syracuse, the pair of them looking positively spiffing in their mauve-hued ensembles. Swainsbury’s delivery of the events of the play to the Duke was a show-stoppingly good moment but I loved Bruce-Lockhart’s raffish handsome playboy charm too: Richard Frame and Jon Trenchard made appealing Dromios, Frame in particular delivering the Nell speeches hilariously.

But I was astounded by Robert Hands’ Adriana who managed to pull a beautifully impassioned and sympathetic interpretation of a role often characterised by its shrewishness. For sure, she’s initially a leopard-print-wearing harridan but Hands never lets us forget that she is a wronged wife dealing with extraordinary circumstances too: an exceptional performance. He is ably supported too by a great turn from David Newman as her sister Luciana, more demure and ladylike on first appearance but there’s highly amusing hidden talents there too and together they are riotously funny.

Looking at the two plays together, I really like the fact that they are completely distinct productions, there’s no attempt to unite them under a grand theme and insist that both need to be seen: all they share is an insane amount of both invention and re-invention with an innate sense of the power of clear story-telling. They can be enjoyed separately or together as you wish as everyone in the ensemble gets a fair crack of the whip to do all sorts of things: the singing in Richard III or the more sound effects driven The Comedy of Errors on top of the brilliant acting. In both of them though, there is a clearly a love and respect for Shakespeare but one which is not afraid to push the boundaries and the creative possibilities contained within: this is reverentially irreverent work!

Without doubt this has to be one of my favourite adaptations of Shakespeare that I have ever seen. Taking a play that I wasn’t particularly fond of and managing to infuse such energy and humour into it a considerable achievement and if any production is going to get younger people involved and connected to Shakespeare, then this is it. I don’t think it is too much to say that this will take some beating as one of the productions of the year, even if there’s 11 months to go. Do not hesitate to invest a little time and money on both this and Richard III (I can’t pick between them!), go for a front row seat if you can, and bask in theatrical invention at its best.

Running time: 2 hours 20 minutes (with interval)
Programme cost: £3.50 (covers both shows)
Check website for tour dates
Note: the ensemble sing songs for charity in the interval out in the foyer so make a trip out there to give a penny even if you don’t need to actually spend one

Countdown to new Who: Doctor Who Series 1

Review: A Day at the Racists, Finborough Theatre