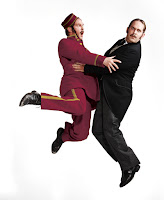 “What are you still doing here? Run away…”

A Flea In Her Ear is a classic French farce from 1907 by Georges Feydeau. This production at the Old Vic is using the 1966 translation by John Mortimer that he did for the National Theatre which actually played at this same theatre featuring Albert Finney and Geraldine McEwan. This time round Tom Hollander and Lisa Dillon take up lead duties in running up and down and all around the stage in this tale of frivolous fancy and manic misunderstandings.
The play is set in turn-of-the-century Paris at the house of Raymonde and Victor Emmanuel Chandebise: after years of happy marriage, Raymonde begins to suspect her husband of infidelity as they are having problems in the bedroom and plots to catch him out with her friend Lucienne. Inviting him to a rendez-vous at the local Hotel Coq d’Or, an establishment well known for housing many such assignations, they set their trap. But the letter ends up in the wrong hands, leaving Victor Emmanuel’s best friend Tournel under the impression that Raymonde desires him and making Lucienne’s insanely jealous Spanish husband believe she is the one having an affair. So everyone rushes off to the Coq d’Or, including the randy local doctor and Victor Emmanuel’s nephew who is off to have a tryst with the cook whose own husband, the butler, suspects something, so off he sets in pursuit as well. And just in case that wasn’t enough, things are further complicated by a hotel porter who looks suspiciously like Victor Emmanuel.
As an early preview, one is inclined to forgive a little of the sluggishness of the first act as it needs tightening up and the humour being much more sharply observed in order to set up the play better. But ultimately, as I have come to realise this year, I am just not a fan of farce as a theatrical convention. There is never anything new or complex about the humour contained within and it never seems to amuse me as much as the audiences around me, creating that weird sense of isolation in a crowded theatre (and it has to be said, this was very well received by the patrons of the Old Vic) but also I dislike the way in which it permits and forgives such extreme, often objectionable behaviour.
As anyone who has been to the cinema with me will tell you, I have an overdeveloped moral code when it comes to drama (Lord knows I don’t in my personal life!) and I hate it when people ‘get away’ with things and this is so often the case in plays like these. Consequently I usually struggle to see the point in them, but I guess it comes down to individual senses of humour. You might wonder why I booked for this show in the first place but we really wanted to see Tom Hollander onstage (my first time) and I do try to keep an open mind about these things, in case a production actually manages to challenge my opinions.
But this wasn’t that production. The aforementioned slow-to-start first act set the tone for both of us, failing to draw us into this madcap world and make us care for any of the characters or what is happening to them. And because of this lack of connection with proceedings on stage, despite the hard work of the likes of the highly energetic Freddie Fox’s speech-impeded Camille, Tim McMullan’s Etienne and Tom Hollander’s double turn as the central Victor Emmanuel and the agent of so much of the confusion, Poche, the show left me largely unstirred. Indeed, the broad slapstick of the likes of the spinning bed and Lloyd Hutchinson’s arse-kicking Feraillon just left me cold. Lisa Dillon and Jonathan Cake were solid in their roles but with relatively straight characters didn’t quite have enough interest for me.
The one real shining light in the show that actually made me genuinely laugh was John Marquez’s outrageous Carlos Homenides de Histangua, a distillation of every Spanish stereotype you could think of but played to perfection, his flamenco stamping in particular was hilarious and very well matched with Fiona Glascott’s no-nonsense Lucienne with a beautiful cut-glass accent and a magnificent hat. And things generally pick up from Act II onwards with a well-choreographed headlong chase through the myriad entrances and exits of the hotel featuring nearly 20 people closing the first half and the capers continuing back at the Chandebises’ residence for the final act, but it is all more of the same really, no complexity, no real intellectual humour and a central conceit which is a little laboured, given we have to wait for Hollander’s costume change each time.
Design for Living aside, this really hasn’t been a strong year for me for this theatre and A Flea In Her Ear does little to rectify this or really justify why it deserved the plum spot over the festive period in the Old Vic programming. Sad to say, I think it has now lost its must-book-everything status in my list and I will start to be much more picky about what I decide to see there, no matter how attractive the cast may be: I should have realised that there would be no room for the beautiful subtleties of many of Hollander’s screen performances in this kind of play. That said, if you are a fan of farces and this is apparently one of the best in the genre, you may find lots to enjoy here: this is but one man’s view. Let me know what you think and if you know what it is that I am missing.