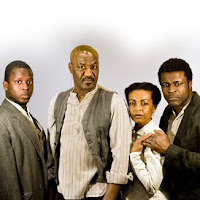 First things first: there’s a credit in the programme for teeth by Fangs FX but I was sorely disappointed not to notice where these came in and this set my mood for the whole show. Joe Turner’s Come and Gone is a play by August Wilson which forms part of a cycle of plays looking at the African-American experience in the twentieth century. It appears here in London at the Young Vic until the 3rd July.

Set in 1911, Seth and Bertha run a boarding house in Pittsburgh filled an array of characters who drift in and out, some for days, some for weeks, all dealing with the new post-emancipation world they find themselves in. The gentle atmosphere is rocked with the arrival of Herald Loomis and his daughter Zonia. Herald has spent seven years in slavery to a white planter named Joe Turner and is seeking his wife Martha, who disappeared four years ago from their home in Tennessee. He is a menacing half-mad presence and the other boarders deal with him in various ways as people coming to terms with their own experiences too.

It just didn’t work for me though. The auditorium has been reconfigured fully in the round which means, despite the giant queues to get into the theatre, you’d think that there’s hardly a bad seat in the house for once. However, the direction has not really fully grasped the opportunities offered by the staging, and indeed the necessities of expertly choreographed blocking: from my seat, practically every scene had someone’s back in front of me barely moving throughout, thereby hampering any involvement I might have hoped to have.

There’s some delights on the acting front: Adjoa Andoh is superb as the warm motherly Bertha, taking strays under her wing and guiding them back onto their path with a maternal love (I have a special place in my heart for Andoh ever since she personified Serafina Pekkala to perfection), Delroy Lindo (who was in the original Broadway cast in 1987 in a different role) is towering as Bynum who proves more of a spiritual guide for the residents. Nathaniel Martello-White has been a bit of a revelation for me this year with two great performances at the Arcola in Innocence and Knives in Hens and he doesn’t disappoint here either with the laconic Jeremy, as charming and likeable a womaniser as ever you will meet.

But still I did not find the connection to the material that I needed. There was too much shouting from the likes of Kobna Holdbrook-Smith and Danny Sapani as Herald and Seth where there could have been colour and subtlety and the character of Seth epitomised the main problem I had with the play. If he is so uninterested in the story of Herald then why should I be? His constant hectoring in the play was like a thorn in my side, constantly reminding me that I wasn’t enjoying this or caring much about what happened.

The stage and the whole floor is covered in red dirt and I mean every bit of the floor from the moment you step in (plastic bags are provided if you don’t want to put your nice bag onto the dirt), its a random touch which works on the stage but less so in covering your feet with the stuff, and it is must be a nightmare on a wet day. The lighting from Mike Gunning is nicely atmospheric but with some additional touches which range from the frankly odd choice of ultraviolet rays ending the first half to the quirky arch of lights which periodically runs from end to end.

At the risk of inviting much opprobrium, I think the main reason that I did not enjoy this play is due to the fact that I don’t have much interest in the subject matter: without a good knowledge of the historical background of the end of slavery and an appreciation of the African-American struggle, there just wasn’t enough to engage me here, exacerbated by some poor directorial choices which left me feeling evermore isolated. That is not to say that this is not a good play, it was well received on the night I saw it and by a very diverse audience, it is just not one for me.