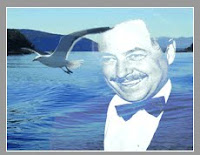 “You understand how the world turns on successfully practised duplicity? On cunning lies?”

I think Phil Willmott and I would be very good friends. Creator of two of my favourite musicals in recent months, joyous works both, and whilst I may not have entirely approved of F**king Men, I can see where he’s coming from as it were. So I was quite upset when Phil went and ruined our friendship by choosing Chekhov as his next project, why Phil why? Still, all is not lost as it is at least Chekhov once removed.

The Notebook of Trigorin is described as a ‘free adaptation’ of Anton Chekhov’s The Seagull by American playwright Tennessee Williams. It’s quite the moment for Williams rarities in London with one of his earlier plays Spring Storm at the National Theatre and this Notebook both being performed for the first time in the capital. It mostly follows the plot of Chekhov’s original, so Masha loves Constantine who loves Nina who loves Trigorin who is also loved by Arkadina. Williams’ conceit is to make Trigorin the focus of the play and with more than a hint of autobiographical detail, makes him a closeted homosexual. So the tangle of relationships, with the destructive mother/son dynamic between Arkadina and Constantine at its core, becomes centred around the self-possessed Trigorin who is in the midst of all the tragedy in the play, yet remains unscathed by it.

It is a strange mixture, with all the requisite Chekhovian tragedy but heavily suffused with Williams’ trademark dialogue and languorous atmosphere. It is familiar yet different and it mostly makes for an interesting evening. The sharper characterisations are a welcome addition, there’s a greater sense of purpose to many of the players, but at the same time, there’s oddities. In making Trigorin’s sexuality ambivalent, Williams adds very little to the play, this thread is not pursued to any depth and it changes nothing ultimately. Tennessee Williams spent a lifetime haunted by The Seagull and finally realised his dream of adapting it two years before his death, and so perhaps there’s a touch more vanity in this project than is strictly acceptable.

The performances were all good: standouts in the ensemble were Andrea Hall’s Masha, deeply unhappy and never without a glass in her hand, she communicated her pain as much with her eyes as with her words and Morgan James’ drawling Dorn, a lascivious, seedy doctor. Great attention has obviously been paid to the vocal work and it shows in a range of impressive convincing and constant accents. The only weak point was in the slight miscasting of Rob Heaps as Constantin: he looks perfect as a Russian and would fit right into a regular production of The Seagull, but his pale looks and curly locks meant his accent was just at complete odds with his appearance. His performance was still strong though, painfully intense and unable to deal with his mother’s inability to connect with him.

As the vain, self-centred Arkadina, Carolyn Backhouse does well, capturing the narcissism of this actress who wants the world’s attention at all times, full of nice touches (I adored the moment when she held a note as far away from her as possible to read it, unwilling to admit to her failing eyesight) but it would have been nice to see some genuine vulnerability in amongst all the over-acting and vamping. And as Trigorin, Stephen Billington brings a curiously mannered performance, all stiff upper lip and not enough allure in order for us to buy his appeal to the ladies of the house. And on a final note for all those Doctor Who nerds out there, after Donna’s mum in Spring Storm, Trinity Wells the American newsreader is in this! Lachele Carl is practically unrecognisable in the small role as Polina, but still effective.

The set is simply dressed with some wrought iron detailing and wooden floorboards suggesting the balcony of a grand house and a touch of furniture at the back representing the study in which Trigorin does much of his writing. After the interval, the set is flipped so that we’re now in the office looking out onto the veranda. Initially this was quite effective, but it soon came to pass that it was really quite an awkward staging decision. With a bench and a desk and chair facing the back wall, the cast constantly have to twist round and put themselves in odd positions so that we’re not constantly watching their backs. It looks wrong, at one point there’s six people on stage and yet we can only see the face of one of them. The voiceover trick, used to describe the new scene at each scene change was as annoying here as it was at the National Theatre in Spring Storm. And whilst I’m being critical, almost all of the satin dresses need to be fitted better on Arkadina and Nina, being so close to the actors means that details like these are more glaring than usual.

The Notebook of Trigorin is an odd one to categorise, it is both a Chekhov play and a Tennessee Williams play but at the same time it is neither fully and so it may leave fans of either feeling a little short-changed though I do think it is worth a visit. Those with no knowledge of The Seagull will find this an interesting piece too, just as long as the blocking in the second act can be sorted out a bit.

TV Review: And Then There Were None

1 thought on “Review: The Notebook of Trigorin, Finborough Theatre”