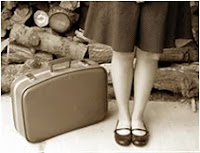 “You will get off the bus and go to some sort of dining establishment and make eyes. Someone will find you.”

You May Go Now – A Marriage Play, written by US playwright Bekah Brunstetter takes up the Sunday/Monday slot at the Finborough theatre for the next three weeks, and is the first time that this play has been performed in Europe. Things open with Dottie teaching her daughter Betty how to be the perfect 1950s housewife, today’s lesson is baking and icing a cake. The kitchen set is carefully dressed with a great eye for period detail but it soon becomes clear that all is most definitely not what it seems under the surface. Betty has been a virtual prisoner, allowed no contact with the outside world, yet Dottie then throws her out into that world on her 18th birthday to find herself a husband. The next scene then flips the scenario on its head as Dottie becomes a modern-day woman, with a depressed husband, struggling to complete a novel: or does she? When Betty returns from the bus stop, and is followed by a mysterious boy called Phillip, it is clear things are about to change.

It is darkly funny, with lots of sparky dialogue especially around the largely unaware Betty, and the story itself is engaging and suspenseful once one has gotten a handle on the wilfully obscure structure. But there were also elements that didn’t work: the hints of child abuse were most disconcerting but then swiftly abandoned and left unexplored. And it was never apparent to me why Dottie was trying to get rid of Betty in the first place, the act that sets up the whole play.

As Dottie, Lucy Newman-Williams does a terrific job in navigating the wildly disparate elements of this woman, Stepford wife robotic intensity to modern-day novelist and bawith skill: the look of hurt on her face at the poorly iced cake was genius, Florence Hall’s Betty is sweetly angelic as the inquisitive naïf and then able stretch into a wider range of emotion as the truth of her situation slowly reveals itself, Michael Benz brings a youthful energy to the enigmatic Phillip, but Ryan Early is a bit miscast as Robert, looking too young and being dressed too old, and with an underwritten part, struggles to make much impact.

>A space such as the Finborough is very unforgiving if there hasn’t been the utmost attention for detail and a couple of glaring errors did raise their head: for someone who had never even seen a computer before, Betty was able to navigate her way around a series of applications on the laptop within 30 seconds of sitting down and let’s just say someone is desperately in need of some target practice. Small things for sure, but they take you right out of the moment, and that is something this production can ill afford.

Despite a terrific central performance from Newman-Williams and an often wicked sense of humour, You May Go Now left me with mixed feelings. With such a dense structure that I am not sure I fully understand even now, the audience is deprived of any meaningful emotional engagement and the opacity of its message in linking the experience of housewives in different time periods remains just that, opaque. But on the other hand, I laughed lots and really quite enjoyed myself. I think you’ll have to go along and make up your own mind about this one!