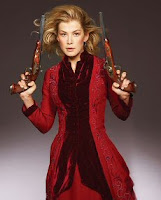 “Let’s all just cheer up and start enjoying ourselves”

It would appear that the punishment for appearing in Madame de Sade last year is banishment to South-West London: Dame Judi is currently doing time in Kingston and Rosamund Pike has now surfaced in Richmond, in this latest version of Ibsen’s Hedda Gabler: should we expect Deborah Findlay to surface in Wimbledon sometime soon? (actually I’d go pretty much anywhere to see her, I think she’s ace!)

But I digress. Ibsen’s tale of the conflict between how a woman feels and behaves and how she is expected by society to feel and behave, is told in the form of the newly married Hedda, resigned to a safe and loveless marriage yet still yearning for a life of passion and willing to manipulate anyone anyhow in order to feel something. And it is told extremely well here with a dark humour that I have never seen before in an Ibsen which made me love it, and an incredibly strong ensemble who have gelled extremely well. The interactions between the characters are quite something to behold, their conversations feel so incredibly real, sparking off each other with ease, and breathing a life and urgency into the text that made a much welcomed, stark contrast to the dour recent Ghosts.

As the titular heroine, Pike is just brilliant. She is beautifully malicious, one really believes she would burn Mrs Elvsted’s hair right there, a thought confirmed by the glint in her eye as she actually burns the manuscript page by page later on. Her haughty posture in dealing with those she believes are below is convincing and nicely contrasted with the quiet moments in the dark as she pounds her belly, bemoaning her fecundity. She commands the attention throughout, brooding, smouldering, daring and just a delight to watch. She even almost convinced me of some good piano playing skills but from my second row seat, I eventually saw through the trickery!

Special mention must go to Yvonne Milnes’ costumes: Hedda’s dresses were just gorgeous, I think the opening dark green velvet number was my favourite, but each one looked stunning, helped of course by the stunningly beautiful Pike (who I think should have been recognised more for her hilarious role in An Education).

She is ably assisted by Robert Glenister’s superb Tesman. Poignantly aware of his inferiority, both to his peers and his wife, this was a dignified performance that I much enjoyed. But this is an exceptionally good ensemble throughout though: Colin Tierney’s passionate Loevborg sharing a really quite erotic scene on a chaise longue with Hedda; Anna Carteret’s Aunt JuJu (working a great bonnet) capturing a lively familial bond with her nephew; Tim McInnerny as a suave, self-assured Judge Brack, sleazily suggestive and ultimately all too keen to blackmail his way into Hedda’s frock ; Zoe Waites with an almost painfully raw performance (calling Jessica Hynes to mind actually) desperately loyal to a fault; even Janet Whitaker’s Bertha, the smallest part, is invested with a warmth and uncertainty about her future that is endearing.

The staging is simple and open-plan, initially a bit confusing as there’s reference to two, possibly three rooms, but it works in reminding us that Hedda is being constantly observed. Key pieces of furniture and burgundy-hued walls suggest a period setting nicely, and I liked Mark Henderson’s lighting design too.

This is a touring Hedda, Nottingham and Oxford are its next stops, but after that it is currently unclear: a West End transfer has been rumoured and I hope it gets it as this is a top quality cast making an excellent stab at this over- familiar play. In staying away from melodrama and the ‘tragedy’ of it all, this Hedda Gabler actually engages, made me laugh and ultimately chills with a cruel intensity that makes you wish there was some other way of expressing approval at the end instead of clapping, such is the mercilessness of its ending.