Perhaps in one fell swoop, I am undoing all the work I have done this year to try and mould myself into a semi-serious theatre critic, but darn it, it is Christmas and I am shallow, so I proudly present to you, my top ten hottest guys I’ve seen on stage this year! And I know, there’s no consistency about whether it’s the actor or the character who I found attractive, but it’s hot guys, who cares!

NB: I did actually book my tickets to see The Priory before the casting was announced, it was purely fortuitous that all 3 main guys happened to end up on this list, true story!

1. Elliot Cowan
Initially staking his claim for a place on this list with an intensely physical performance as Stanley in the Donmar’s A Streetcar Named Desire, Elliot Cowan delivered the knockout punch with a wonderfully nuanced portrayal of Edmond earlier this month. He also directed this production as part of a campaign to keep Wilton’s Music Hall open, so not only is he bee-yoo-ti-ful with arms to die for, he also has brains and a social conscience: I know what I would like under my tree this year!

In a year full of gay plays and plays full of gay characters, Joseph Millson actually managed the rare feat of creating one of the few fully rounded, fully recognisable ‘normal’ characters who happened to be of the homosexual persuasion on the stage this year. His work in The Priory was excellent, creating a realistic man who was wholly believable in his indignation at being labelled one of ‘the gays’ yet not allowing anyone else in his kitchen, objecting to being stereotyped as being out clubbing and cruising all the time and then inviting his Gaydar trick along to the party. Also good in Every Boy Deserves Good Favour and Judgment Day this year, Millson loses out on top place for being cast in Andrew Lloyd Webber’s new play, thereby forcing me to see Love Never Dies in order to see him next year.

3. Hans Kesting
An unexpected entry for sure: a Dutch actor previously unknown to me, performing six straight hours of Shakespeare in his native tongue from his wheelchair having just broken his leg, but Kesting’s portrayal of Mark Antony in The Roman Tragedies was nothing short of stupendous. He exuded a raw magnetism and his chemistry with Chris Nietvelt as his Cleopatra was so electric, so sexually charged, that there was little need for the surtitles: this was acting that transcended language.

4. Andrew Lincoln
Someone initially trading a bit on past televisual glories (Egg from This Life) and a few stalkerish experiences following him round Tesco’s at Islington Green, Lincoln’s performance in Parlour Song at the Almeida definitely earned him a place on this list. Demonstrating an affable blokish charm throughout that had the audience in the palm of his hand, and left you totally understanding how Amanda Drew’s character would slip into an affair with him and wishing that all your neighbours looked that good in a white vest!

5. George Rainsford
One word: abs! (Shame that they are obscured somewhat in the picture, but this was the best I could do!) I’m pretty sure Shakespeare never imagined All’s Well That Ends Well being delivered by someone quite so boyband-perfectly-sculpted, but I can say I have never been so grateful for the £10 Travelex seats in Row B at the Olivier Theatre.

6. Oliver Thornton
Just look at the picture! His appearance in Priscilla Queen of the Desert practically redefines camp but has enough pathos in it to make him genuinely endearing, and he goes a long way here to erase the terrible terrible memories of the horror that was Rent Remixed.

7. Nigel Harman
I don’t watch Eastenders so never really got the Little Den thing and hadn’t previously seem Harman on stage, but the intimate confines of the tiny Trafalgar Studios 2 proved an excellent introduction to this gentleman’s work for me. His character in Public Property was amoral, selfish and manipulative but sexy as hell and wickedly funny with it, and let’s face it, everyone likes a bad boy now and then. 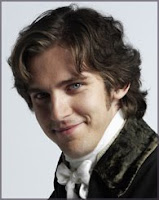 8. Dan Stevens
You have to admire any man who can wear the hell out of a pair of breeches and in Arcadia, Dan Stevens did some excellent work. I’d have paid a lot more attention in my maths lessons had my tutor looked like this!

I was initially über-excited when the cast for The Priory was announced, mostly for the opportunity to see ‘Adam-from-Spooks’ live on stage. And whilst he was good and tall and manly and lovely, I did have to accept that Mr Penry-Jones was playing a different character, one who was not half as intensely sexy as Adam-from-Spooks, plus he didn’t look too hot in a dress, hence this rather disappointing low placing.

10. Alastair Mackenzie
In The Priory, MacKenzie’s appearance was a pleasant reminder as to why I was inexplicably such a fan of Monarch of the Glen on a Sunday night. His technology-hungry travel journalist was perhaps a little too keen to get engaged to his most recent shag, and also had the difficulty of spending too much time in the play in a dress (see #9) but his devotion to his iPhone leads me to think he would definitely be no stranger to the guys with iPhone site, if ya k