“Young boys should be enjoying Nintendos, not old newreaders’ c*cks”

Tucked away in the basement of the Trafalgar Studios, Public Property is a new play, a “dark comedy”, written by Sam Peter Jackson. With a very attractive cast of Nigel Harman, Stephen Webb and Robert Daws, it is a sharply observed look at the world of celebrity scandal and spin doctors, and poses the eternal question: is all publicity, good publicity.
As a married but closeted, high profile newsreader with a new autobiogr 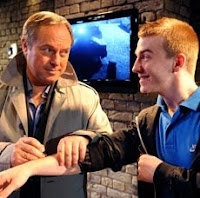 aphy to sell, Geoffrey Hammond finds himself embroiled in a sex scandal when photographers catch him engaged in salacious activities with a 16 year old rent boy in his car. He turns to his publicist Larry to try and spin him out of what seems to be an impossible situation, but all is not what it necessarily seems as the long night goes on, revealing layers of deceit, the machinations of media spin and debates about the scandal-hungry press.

As the PR man Larry, Nigel Harman is excellent: wannabe Machiavellian in temperament and sharply dressed with a rapier wit, he spits out comic lines with verve and his interaction with his beleaguered client is a delicious exposition of a shifting power struggle in which there are no real winners. He also demonstrates a gift for physical comedy with some impressive leg muscles, I’ll say no more! As the homosexual newsreader, Daws is also good, petulantly defiant about public opinion on his private life, though craving their money through his poorly-received book and their adoration as a minor celeb. Although I did take issue with the underworked relationship with his male lover who was only made reference to intermittently despite allegedly being the love of his life, especially as this didn’t seem to fit with his emotional interactions with the rent boy Jamie. And given his desperation for his book to sell, I struggled to believe that he wouldn’t have had more inclination to use the situation as best to his advantage, his was a dubious moral centre to the play.
It is excellently written, with rapid-fire witticisms being thrown out almost non-stop for the vast majority of the play, and the ever-shifting relationships between the three men are well drawn, remaining convincing whilst still making us laugh. The only issue I had was with the way in which the plot contrived to create a bit of a happy ending which didn’t feel in keeping with the play in general.

ebb has had a major haircut inbetween the publicity shots for this show and its opening, but it is an effective one as it makes him look all the more effective as a teenage scally, even if I did have to blink twice to see whether it was still him. His Jamie is vulnerably played, capturing the desperation for someone to hold in his search for a father figure, and being all too easily exploited. Rather amusingly, I was told this anecdote in the break, he was apparently one of the children onstage with Michael Jackson when Jarvis Cocker rushed the stage and was actually knocked off by Cocker and suffered a broken rib!

There is an unexpected amusing cameo scene as the television is switched on to show the unfolding crisis on a breakfast news programme with a couple of rather recognisable faces as the presenter and ‘talking head’: I won’t spoil the names, even though many other reviews have, as it is all rather fun. Which is how I felt about the play in general, it is lots of dark comedic fun, very well acted and stuffed full of killer lines: it is a bit of a shame that the plot couldn’t have been fully executed in the manner in which it started.

Review: As Is, Trafalgar Studios 2

Shows I am looking forward to in 2011