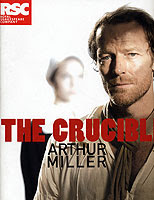 A group of drunken women dancing naked in the woods late one night starts off rumours of witch-craft and devil-worshipping in the little village of Salem and so begins the witch hunt that ultimately leads to the torture and the execution of innocent men and women as hysteria takes over some and cold political survival dominates the elite’s response even at the expense of human life. It’s quite grim, but its power comes from the resonance that it still has today with the political situation in the USA.

It is the young women whose actions spur the initial hysteria but Miller doesn’t point the finger at them, rather the older people in the community who allow things to happen for selfish reasons. At the centre of The Crucible is John Proctor, a man caught up in the madness and unable to shake his inherent goodness in the face of the duplicity of so many of the people around him.

Iain Glen plays John Proctor with a power and appealing dynamism and an undeniable sexuality that he can’t quite keep in control, Elaine Cassidy as Abigail who tempts John to stray and then manipulates events to cover up her transgressions is excellent as is Helen Schlesinger’s Elizabeth Proctor who in becoming the most charitable of souls has lost most of her actual humanity, such is her emotional repression. There is also great work in many of the supporting performances: Michelle Terry’s Mary Warren, Trevor Peacock’s Corey and James Laurenson’s Danforth particularly sticking in the mind.

It is very interestingly staged by Hildegard Bechtler in what is essentially a big white box, Puritan to the extreme, but we’re always aware of the forest that peeks through the windows, of the wildness of nature that this community is trying to contain but ultimately fails, in a striking final image of the forest in all its glory. So quite a delight and a deserved success: both presentionally and dramatically, it is deceptively simple at first glance but full of huge depth and resonance for today’s society: not bad for a play written in the 1950s.